For 10th year in a row, 49 states somehow fail to be more bike-friendly than WA

Washington State has some great public servants and advocates working hard to make our state safer and more inviting for people riding bikes. But try biking across almost any state highway, and you’ll be confronted with scary off-ramps and skinny or missing sidewalks. And there will almost certainly be no bike lane in sight. Getting around or across state highways and freeways is the biggest barrier for people biking in a huge number of communities in our state.

So when I see that, for a decade straight, Washington State has been selected as the League of American Bicyclists’ most bike-friendly state (PDF), all I can think is, Wow, every other state, you must really not be trying.

I don’t mean disparage the work of great public servants, like WSDOT Active Transportation Director Barb Chamberlain (former ED of WA Bikes), or the current WA Bikes statewide advocacy staffers like Alex Alston and Kelli Refer (who also happens to be my incredible spouse). They are doing great work.

But the vast, vast majority of the state’s transportation money still goes to freeway projects — including a downtown Seattle car tunnel — while major safety problems persist on existing WSDOT highways and their access points in communities across the state with no relief in sight. Try crossing I-5 south of I-90 in south Seattle, then tell me how bike-friendly Washington is. 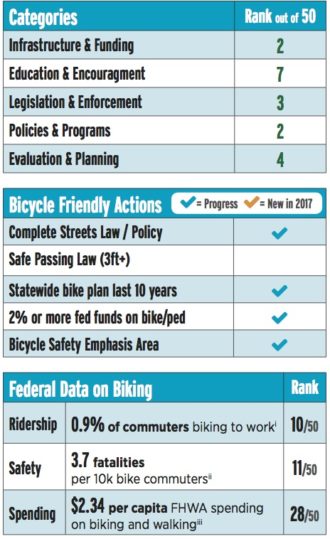 The good news is that there are many great leaders working for our state. Transportation Secretary Roger Millar has a strong multimodal perspective on transportation, and there are many great WSDOT staffers and engineers who are trying to make things better. But the immense scale of the problem is so much larger than the state’s efforts to improve conditions for walking and biking.

The transportation package the legislature barely passed in 2015 included an unprecedented investment of about $20 million a year for walking and biking projects. That money will surely fund some great work, but it’s just not anywhere close to enough. It’s an order of magnitude too low, at least.

So, congratulations to everyone working to make Washington more bike-friendly. And other 49 states, get your shit together. It would be great if you made our state work harder to keep this ranking.

Pedal power is still strong in Washington as the League of American Bicyclists once again ranks the state as No. 1 “Bicycle Friendly State in America.” Washington has been a leader in the nation for every year since 2008 when the League began its program.

“Our efforts to support bicycling in Washington through our policies and investments is clearly paying off,” said Gov. Jay Inslee. “As a state we have invested in Safe Routes to School for a healthier next generation and in a transportation system that supports safer biking and walking mobility options for Washingtonians. I appreciate the work of our Bicycle Friendly communities, businesses and universities that have all contributed to building active, healthy transportation options.”

Each state is ranked based on its score in five categories: Infrastructure and Funding; Education and Encouragement; Legislation and Enforcement; Policies and Programs; Evaluation and Planning; and, Discretionary Scoring.

“It’s great to once again lead the nation in recognizing that bicycling is an important part of a multimodal transportation system,” said Secretary of Transportation Roger Millar. “We’re committed to providing transportation choices for all users of the system – including people who bike and walk. We have more work to do, but this ranking affirms that we’re on the right path.”

The League credited Washington for passage of its 16-year Connecting Washington funding package, including more than $20 million per year for bicycling and walking projects. It also noted Washington State Department of Transportation’s creation of the new, statewide Active Transportation Division as another reason why the state has retained its spot as a national leader in improving conditions for people who bike and walk.

More details on the ranking, from the League’s report card (PDF): 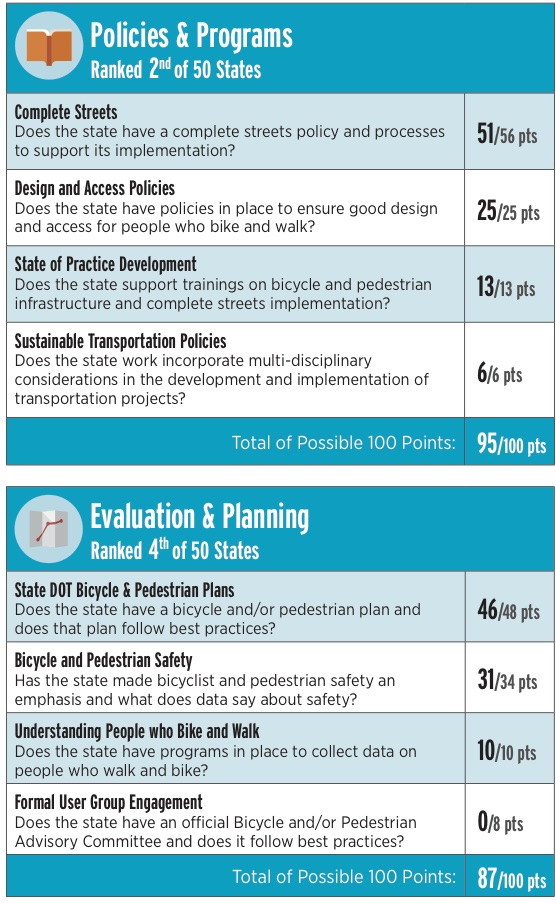 Founder and Editor of Seattle Bike Blog.
View all posts by Tom Fucoloro →
This entry was posted in news and tagged league of american bicyclists, wsdot. Bookmark the permalink.

9 Responses to For 10th year in a row, 49 states somehow fail to be more bike-friendly than WA