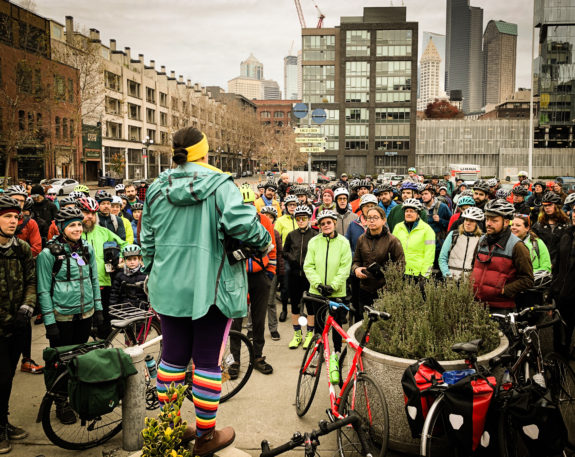 I thought it was a bit strange that the line for the two sign-up clipboards was so long. I had used the same forms for nine Cranksgivings before, and the line to sign in was never that long before. So it was a good thing that I made so many extra spoke cards … except then those ran out, too.

An astounding 190 people rode Seattle’s 10th Annual Cranksgiving Saturday, far beyond our all-time attendance record set in 2016 at 160. I am just floored by all of you who came out to ride bikes and buy some food to support your community. Thank you.

UPDATE: The official count was 2,223 pounds of food donated. This is the first time riders have topped the one-ton mark. Good work, everyone!

Big thanks to co-presenters The Bikery and Swift Industries. Once again, Swift hosted the afterparty in their store and workshop in Pioneer Square and donated prizes. Other after party and prize sponsors included Cascade Designs, Cascade Bicycle Club, Bike Works, Kelli Refer and Rainier Brewing.

There was an incident that forced RVFB to close Saturday, but they were able to open today to get the donation out the door and onto tables throughout the community.

Here are some great scenes from the day posted to #CranksgivingSEA:

Another successful #cranksgivingSEA with Team ELS! 180+ bicyclists donating a truckload of food to @RainierValleyFB . Piles of panniers and backpacks at the after party at Swift Industries. pic.twitter.com/sMKAeMVMq8

2/2 Scavenger hunt is a big part of the fun, as figuring out routes & side challenges test one's knowledge of the city – we're glad to have helped @RainierValleyFB collect food for people in need – looking forward to next year's already!#cranksgivingSEA @seabikeblog #SEAbikes pic.twitter.com/kePqMktsGW