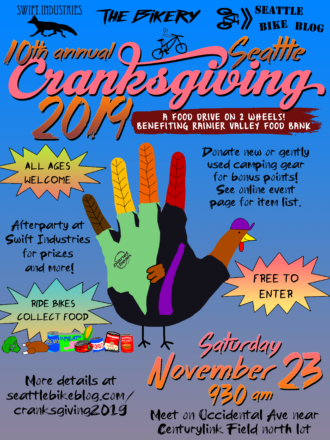 That’s right, this will be the tenth (!!!!) Cranksgiving Seattle Bike Blog has organized. I have had to do the math a bunch of times because I find it hard to believe, but it’s true.

So this will be the tenth year people from all over the region will get together the Saturday before Thanksgiving to bike around town buying groceries to donate to Rainier Valley Food Bank. I don’t have the exact totals from all the years, but people have donated something like five or six tons on food since the first Seattle Cranksgiving in 2010.

Thank you to everybody who has participated or sponsored the event in the past decade, especially longtime sponsor and afterparty host Swift Industries. And big thank you to Rainier Valley Food Bank for all you do for the community all year round.

Seattle Cranksgiving 2019 is November 23, and it’s starting an hour earlier than in previous years. So meet on Occidental Ave near the Centurylink Field north lot at 9:30 a.m. to get ready for a 10 a.m. start. The hunt ends by 1 back at the start. Invite your friends via Facebook.

A food drive scavenger hunt by bike, you will get a list of needed food items and places to shop. You can go solo or as a small team (four adults max per team). The more you buy and the more places you buy from, the more points you get. There are also photo challenges and more.

All skill levels welcome! And anyone can win a prize.

Free to enter, but expect to spend at least $20 buying groceries (more is welcome, of course). Bring a pen and a way to carry groceries.

Party at Swift Industries after the ride, sponsored by Rainier beer. Thanks to Swift and Cascade Designs for donating prizes. And thanks to volunteers from The Bikery for partnering to help present the event this year.

If your business wants to donate a prize to participants, email [email protected].

Last year, 150 riders donated a record 1,713 pounds of food. It was so much that we’re starting an hour earlier this year to give Rainier Valley Food Bank more time to get the donations,especially fresh ingredients, out into the community on their busiest day of the year.

Also new this year, West Seattle Bike Connections is hosting their first Cranksgiving to benefit West Seattle Food Bank November 16. Meet at 10 a.m. at the food bank. More details here. There may be some bonus points for people who do both Seattle Cranksgivings…

Cranksgiving rides started on the east coast and now happen all over the nation, including Tacoma (Nov 16), Port Angeles and Sequim (Nov 23). Back in 2010, there were no Cranksgivings in the Pacific Northwest that I could find, so it’s really great to see so many happening now. It’s a wonderful and simple way to have fun and support your community and your local food bank.