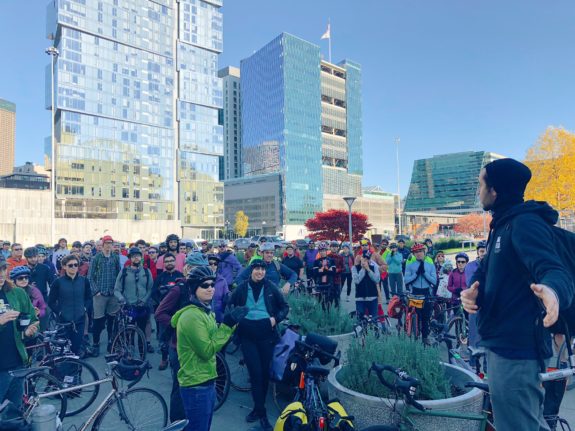 Miguel Jimenez from Rainier Valley Food Bank addresses Cranksgiving riders at the start of the event.

For the ninth year, Seattle Bike Blog hosted this food drive scavenger hunt by bike on RVFB’s final distribution day before Thanksgiving. It’s a very low-budget event that is free to join. Participants are given a list of items to buy and a list of local grocery stores and stands around town to buy them from. So participants’ money and effort goes directly into donating food and having fun biking around our beautiful city. There are also some photo challenges for extra points, and you can see some of the results below.

Thanks to Swift Industries, G&O Family Cyclery, Cascade Designs and Olympia Beer for your prize and party donations. And big thanks to my wonderful spouse Kelli for helping to procure prizes, donating a few copies of her book Pedal, Stretch, Breathe, and for taking on extra baby-watching duty so I could organize the event.

And finally, thanks to everyone who joined us Saturday. You were all so positive, lovely and generous. I’m thankful for all of you.

Here are a few scenes from #CranksgivingSEA:

#cranksgivingsea and we have collected kids! 2nd ave bike lane is so awesome. Look at their natural ability to use the leaning posts! I can’t even teach them that!

It was a #cranksgivingsea miracle! Eileen was given a new crank from The Bikery after some mechanical issues today and she finished the ride in time!

Other images from #CranksgivingSEA. We ended up in the top 3! pic.twitter.com/tlQVTFL9AB

Had an awesome time at my first #CranksgivingSEA during which ~150 of us donated 1,763 pounds of food to the @RainierValleyFB (Food Bank) which will feed 3,200 people – thanks to @seabikeblog @SwiftIndustries for hosting this #SEAbikes pic.twitter.com/Xxp9RnPgch

This entry was posted in news and tagged cranksgiving, cranksgiving 2018. Bookmark the permalink.

1 Response to Scenes from Cranksgiving 2018: A new donation record