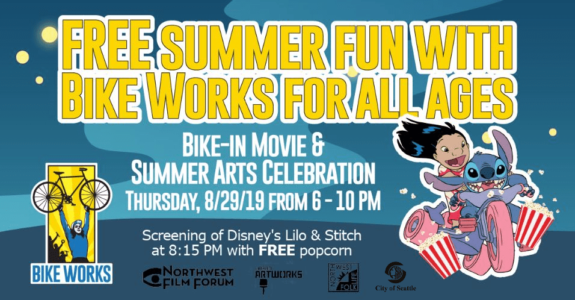 There music and public art starting at 6, and the movie starts at 8:15.

Join Bike Works, NW Film Forum, Urban Artworks, and NW Folklife for our BIKE-IN MOVIE NIGHT in Pratt Park! Bring a blanket, snacks, and friends of all ages for this free summer event.

This year, through our partnership with Urban Artworks, we’ll have an interactive arts and mural activity for youth to participate in, as well as performances from a diverse group of musicians from Northwest Folklife before the film. We’re also screening 2 shorts featuring bicycles from Northwest Film Forum’s Children’s Festival before the feature film.

Performances from:
We’ll be screening Disney’s Lilo & Stitch about a young girl who adopts an ugly ‘dog’ who turns out to be an alien. They embark together on a raucous adventure via trike & surfboard around the Hawaiian islands.