Here’s a look ahead at a couple interesting bike events coming up this weekend. Also, as a reminder, you can spread the word about your bike-related events by posting to our completely free Events Calendar. 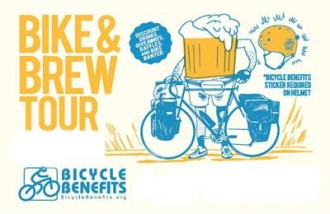 Bicycle Benefits is hosting their first ever Bike & Brew Tour.

Bike around the city and grab a pint from some of Seattle’s most bike-friendly breweries. And, of course, slap a Bicycle Benefits sticker on your helmet and you’ll get discounts the whole way.

We’ll be biking around to showcase breweries in the area that are supportive of biking…great swag, discounted beers, free food, bike banter..Awesome time! Count on about 20 total miles and finishing at the Seattle Bike In Movie @ Cal Anderson Park on Capitol Hill. If you like beer and biking this ride is for you. 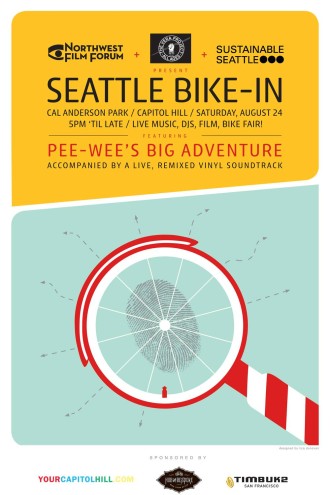 The popular bike-in movie at Cal Anderson Park is back. This year’s film: Pee-Wee’s Big Adventure.

The film screening will be preceded by a bike fair starting Saturday at 5 p.m. The movie starts at 9.

Co-presented with Sustainable Seattle and The Vera ProjectSponsored by Bike Works , Hub and Bespoke, Timbuk2 and Your Capitol Hill.com

Named as one of the reasons that Pike/Pine is considered “Top 12 Art Places in America,” the Seattle Bike-In has become a staple of the summer outdoor movie calendar. This 8th annual celebration of green transportation, our urban community and summer nights encourages you to grab your bike and grab your friends for our annual event in Cal Anderson Park on Capitol Hill! The event includes live music and DJs, film and a fair from local cycling organizations and merchants.

>> a screening of Pee-Wee’s Big Adventure a 1985 comedy classic by Tim Burton about Pee-Wee’s search for a stolen bicycle, with a remixed soundtrack (including new music, sound effects and live DJing) by Jon Francois (DUG) & Eardrumz (Stop Biting).

>> A live set from Tacoma post rock band Lo’ There Do I See My Brother Listen to some tunes from their album With Eyes Open, We Fall On Our Swords: http://lotheredoiseemybrother.bandcamp.com/