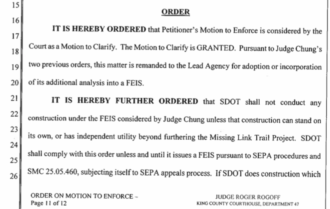 Screenshot from the clarifying ruling (PDF).

A clarifying ruling by King County Superior Court Judge Roger Rogoff this week has put some extra pressure on the City of Seattle to win an ongoing appeal if they want to keep construction of the Ballard Missing Link on its recently-announced schedule. It also raises some questions about ongoing work on Market Street.

“The Superior Court ordered that SDOT may not proceed with construction of the Missing Link of the Burke-Gilman Trail until additional steps under SEPA are completed,” Dan Nolte, a spokesperson for the Seattle City Attorney’s Office, said in an email to Seattle Bike Blog. “We respectfully disagree with this decision and believe that we have already complied with SEPA and the Court’s orders. Appeals are ongoing in the Court of Appeals and the City is evaluating next steps.”

Trail opponents have all but declared victory following this ruling (read their statement in this PDF), but that may be a bit premature. They lost almost every argument they made, and the only one that stuck has been thoroughly dismissed by the city’s latest economic study. So sure, if the city loses its appeal, opponents would live to fight another day and would successfully delay the project even more and further increasing the city’s costs (hooray?). But they should have a much more limited set of arguments to make since they would really only be able to argue against the new economic analysis (at least I think this is the case, though I am not a lawyer).

And, if the city wins its ongoing appeal, then this should all be a moot point because the courts would have determined that the economic analysis wasn’t needed in the first place and the initial FEIS was good to go. I say “should” because we have seen this trail delayed by increasingly complicated legal battles for decades. I’m not going to declare this thing a done deal until the day we cut the ribbon.

The more interesting and troubling question is whether the ongoing work on Market Street is now under scrutiny. Judge Rogoff’s decisions says, “It is hereby further ordered that SDOT shall not conduct any construction under the FEIS considered by Judge Chung unless that construction can stand on its own, or has independent utility beyond furthering the Missing Link Trail Project.”

The Market Street segment currently under construction is part of the city’s Ballard Multimodal Corridor project, which includes transit, paving, utility and street safety upgrades in addition to the trail connection between the Ballard Locks and 24th Ave NW. So is that enough to satisfy Judge Rogoff’s “independent utility” requirement? The City Attorney’s Office did not have an immediate and clear answer about whether this work could continue (staff was leaving for July 4 vacations as this story was breaking). I don’t know what would happen if the city had to stop work while Market Street is half demolished. Hopefully that doesn’t happen, because that would be a real nightmare scenario.

So yeah, as you can see, there’s a lot riding on the City Attorney’s appeal.

Summary of the trail’s environmental study

More about this latest decision

Again, if the city wins its appeal, Judge Rogoff’s latest ruling should be a moot point. But if they don’t then his ruling removes a possible legal shortcut for the city’s trail project. The following is my analysis as someone who is not a lawyer.

Rogoff was having none of the city’s argument that its latest 66-page economic analysis did not significantly change the findings of its enormous Final Environmental Impact Study (“FEIS”) and therefore did not require them to release a supplemental FEIS. His July 2 ruling also does not comment on whether the city’s economic study satisfies Judge Chung’s concerns, saying the city would need to go through the whole public process before the Superior Court would make such a decision.

The ruling also clarifies that the city is not to begin construction on the trail sections in question until the FEIS is fully complete and appeals are exhausted.

The initial King County Superior Court ruling found that the city’s FEIS adequately answers every concern except for one: The possibility of an economic impact on businesses, especially as related to possible insurance rate increases. The city’s follow-up study determined, based on insurance industry interviews, that insurance companies do not use proximity to a trail in determining their rates. And while hypothetical collisions in which company drivers were found at fault could feasibly increase rates, “We anticipate that completing the trail would lower the probability of collisions compared to existing conditions,” the study authors wrote. Because, of course, that’s the point of this project.

People biking are getting injured at an alarming rate in this area, and they have been for a long time. Increasing safety is at the core of the project’s goal, and the appellant group lost their arguments that the trail would increase collisions. So if the trail is not expected to increase collisions and would not be responsible for a commercial driver breaking a traffic law that results in a collision, then the trail project could not reasonably be responsible for any insurance rate increases.

But what makes sense to me seems irrelevant in this endless legal battle. I’m assuming trail opponents will continue their appeals until they run out of legal avenues or money. And the appellant group’s attorney Josh Brower has proven very capable at tying up this project in endless legal battles for far longer than most people expected. He’s not exactly winning, but he keeps not losing. Even if the city wins its appeal, I won’t be ready to declare victory until the last cubic foot of asphalt is dry.

This whole debacle has also highlighted serious problems with our city and state SEPA laws. SEPA puts proposed projects under intense scrutiny, but not the status quo. The result is that existing dangers (like people crashing while biking in this area) and existing environmental impacts (like fewer people biking because of this trail gap) get protected by our own environmental protection laws. This is all backwards. It would likely take a state law to reform SEPA, and the Missing Link is a pretty good poster child for that effort. Because we have wasted decades and millions of dollars on a fight that has resulted in hundreds of people being injured. This is a broken system.

If the city loses its appeal, SDOT would need to release a supplemental FEIS. That more or less means resetting all the clocks basically to where things were in June 2017 when the FEIS was first released. There would need to be another public notice period, Hearing Examiner appeal and King County Superior Court appeal, assuming the trail opponents want to pursue legal delays as far as possible (and they have made it quite clear that they do). Perhaps the new cases would go faster since I believe only the much shorter economic impact addendum would be up for debate, but just getting on the court calendars makes up a lot of the delays in this process.

Losing the appeal would put the city’s planned construction schedule, as reported last week, on ice. Work is supposed to start on the Shilshole section this year. Well, it was really supposed to start last year. OK, it was originally supposed to start 15 years ago. The Missing Link Industrial Complex requires us to fight about this 1.4-mile trail segment forever because what would we even do with our lives if we weren’t fighting about it?

This has moved past the point of absurdity long ago. It would be funny if people didn’t keep getting hurt.

This entry was posted in news and tagged ballard, missing link. Bookmark the permalink.