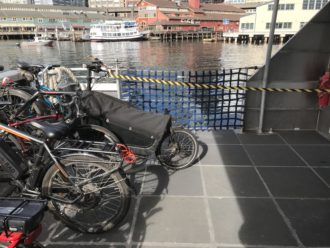 Photo from King County showing a cargo bike that partially blocks the ramp.

In what is sure to be disappointing news to many readers, King County has announced that it will begin limiting the number and types of bikes allowed on its Vashon and West Seattle water taxis.

Bikes and water taxis go together extremely well, especially since driving to the water taxi makes very little sense and transit service is very limiting. In fact, that’s the problem. Biking to the water taxi has become too successful, and King County did not design the vessels with enough space to meet demand. So they will now be limiting each sailing to 26 bikes.

They also did not design the vessels with larger family and cargo bikes in mind, which is a pretty big problem for people who rely on those bikes since you can’t just park it at the dock and check out a Lime cargo bike when you get to Seattle (though wouldn’t that be cool?). This is a bit of a bummer for West Seattle users, but it’s potentially a huge problem for Vashon users. Family bikes don’t just carry multiple people, they also carry all the stuff that comes with them. They are larger than most one-person bikes, sure, but are they much larger than two bikes (one “bike” per person)? Three bikes? Two bikes plus a stroller? Sure, blocking the ramp like in the photo above isn’t good, but banning them entirely feels a bit extreme. I hope they exhausted all other options before arriving at this decision. We’re in the midst of a family biking boom in this region, and this rule change makes it harder for folks to use them.

As for overflow bike parking, obviously storing bikes in ways that block access to exits or railings is not an acceptable solution. But making the bike/water tax combo less dependable is also problematic. About half of West Seattle users and 30 percent of Vashon users surveyed said they have biked to the water taxi, which is pretty remarkable. And considering the region’s goal of increasing walking, biking and transit, this problem should be considered a good problem to have.

But the solution here has the potential of rolling back progress because it only hurts the reliability and usability of this service by people who have listened to King County’s encouragement campaigns to combine biking and transit. The taxis don’t run often enough to make waiting for the next boat a practical solution. If your bike won’t fit on the last of three Vashon water taxi sailings, for example, you now have a very long and unexpected bike ride (8 miles the very hilly way or 12 miles the less hilly way) ahead of you to use the Fauntleroy Ferry instead. You could also try putting your bike on a bus, though they only fit three bikes at a time and still take much longer than the water taxi.

Not knowing the options for creating more bike storage space on these vessels (which I assume is difficult), I’m not sure what the solution is here. But I do know that if people give biking to the water taxi a second thought due to this rule, that’s a loss for our region’s transportation goals. And capping the bikes also pretty much caps the potential growth for biking taxi users going forward.

The good news for Vashon users is that King County will be providing fairly secure bike parking at the Vashon Ferry dock that will be locked behind a fence between the morning and afternoon sailings. So if bike security was the factor holding you back from locking there and either walking, taking transit or using bike share in Seattle, the new bike parking may help. And the 26th person with a bike that sailing will grateful you made space.

Biking and riding the water taxi go great together – like sunshine on the water. Whether for regular commuters or just for fun, it seems that with new styles of bikes the popularity is only growing.

Safety is our No. 1 priority for customers on the water taxi, and our crews have done a great job of keeping everyone safe on every voyage. Metro transit and water taxi services – buses and boats and bikes – support a healthy community and environmental sustainability through a car-free lifestyle.

In recent years we’ve seen demand growing for storing bikes onboard sailings, especially to and from Vashon Island during peak bicycle season. At times, this has created unsafe conditions for passengers when the demand exceeds the 26-bicycle capacity – leading customers to secure their bikes to handrails, or within walkways or doorways.

Sometimes customers also secure longer bicycles that can stretch well into walkways and block the exit ramp area. Bicycles that have wider cargo platforms also can exceed the space intended for standard size bicycles, which reduces the total capacity for bike storage per sailing.

After careful consideration focused on protecting the safety of customers, starting June 24 we will be limiting the number of bicycles per sailing on the Sally Fox and Doc Maynard to 26 bikes, and bikes must fit within the marked bike storage area. Up to 14 bikes will be allowed on Spirit of Kingston sailings.

In 2018, Marine Division leadership determined it was time to address safety concerns and engaged riders in problem-solving. To better understand the needs and concerns of customers, we conducted two focus groups, including six bike riders in one group, and eight non-bike riders in a second group. Information from the focus groups was used to develop a survey which was shared in December 2018 on both Water Taxi routes.

We learned that riders are supportive of safety and agreed clearer information was needed around bicycle storage and capacity issues during sailings. Approximately half of those surveyed in West Seattle reported taking their bicycle onboard the water taxi; 29 percent of Vashon riders reported taking a bicycle on a sailing. The majority of West Seattle (81 percent) said they had no problem finding onboard storage for their bike; but that number was only 56 percent for Vashon riders. Most riders didn’t want to grant priority boarding or require a fee when traveling with a bicycle.

In April 2019, Water Taxi and Metro bicycle staff shared this information and consulted with a representative from the Cascade Bicycle Club and a member of the Vashon bicycle community who served on one of the focus groups.

With their guidance, and based on the recommendation from focus groups, a safety line recently was installed on the Sally Fox and Doc Maynard that depicts the maximum allowed length of a bicycle that can be safely secured in the onboard bike racks during sailings.

To help riders confirm that their bike is within the allowable dimensions, water taxi staff worked with Metro to create measuring boxes. One box is installed at Pier 52, and boxes also will be placed at the Vashon and West Seattle docks.

Riders will have options if their bike is too long to bring onboard, or if there is no available storage space for their bike on a particular sailing.

On Vashon Island, riders can either wait for a subsequent water taxi sailing, board a WSF ferry to Fauntleroy, or store their bike at the bike rack provided by King County on the Vashon Island float. The bike rack and dock will be secured by locking the entrance gate by WSF after the last morning sailing on weekdays and remain locked when the water taxi is not in operation. The gate will be unlocked prior to the arrival/departure of the first afternoon sailing.

The Vashon route of the Water Taxi has three eastbound morning and three westbound afternoon sailings.  The 7:10 a.m. and 8:15 a.m. sailings and the 4:30 p.m. and 5:30 p.m. sailings generally represent the peak demand service to and from the island.

These trips to and from Vashon carry a range of 100-278 passengers. The sailings from Vashon at 6:10 a.m. and from Seattle at 6:30 p.m. typically have more bicycle stowage capacity.

For the next week, crew members will be available to answer questions about the new bike safety policy, and touch base with riders who have concerns. Beginning June 24, crew members will be instructed to prevent bikes that are too long and overflow storage within walkways and in front of doors on the vessel and inform customers of their options in the event that on-board bicycle storage reaches capacity.

Metro and Water Taxi staff will monitor and assess the effectiveness of the new safety rules, and are open to considering refinements that maintain or further improve safety on our vessels.

Concerns or feedback can be shared with Water Taxi staff in person or through King County Metro customer service or by emailing [email protected].

Some other notes for riders: