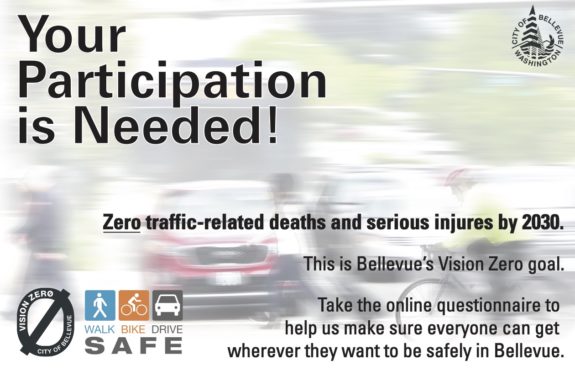 The Bellevue City Council unanimously endorsed Vision Zero in 2015, and now they are putting together an action plan to help eliminate deaths and serious injuries on city streets by 2030.

City staff have put together an online survey to gather perceptions of traffic danger and stories of how traffic collisions have affected people’s lives. The survey walks through some of the basic tenets of Vision Zero, including questions that don’t get asked enough such as whether “it is unacceptable for anyone to be killed or seriously injured while traveling on Bellevue streets” and whether “human life should always take priority over moving vehicles faster.” The survey is probably as much about getting the respondents to think about traffic collisions in a different way as it is about gathering useful data.

But the sad reality is that our culture has thoroughly embraced death and injury on our roads as simply the cost of getting around, and it will take a lot of work to change that. The questions in this survey can’t be asked enough.

So if you live, work or spend time in Bellevue, take the survey and pass it around. Because Bellevue has a lot of work to do to reach this goal, and as with any city it’s going to take both infrastructure and cultural changes to get there. 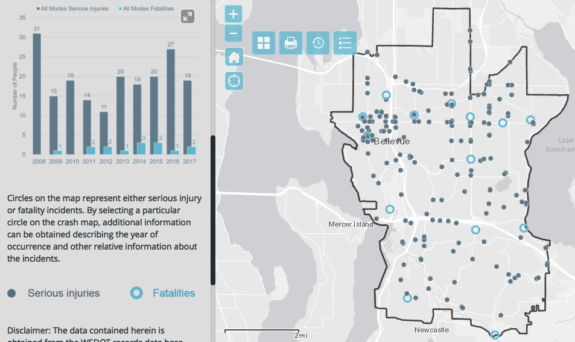 City map of deaths and serious injuries on Bellevue streets 2008-2017.

This entry was posted in news and tagged bellevue, vision zero bellevue. Bookmark the permalink.

4 Responses to Bellevue is creating a Vision Zero ‘action plan,’ take their survey