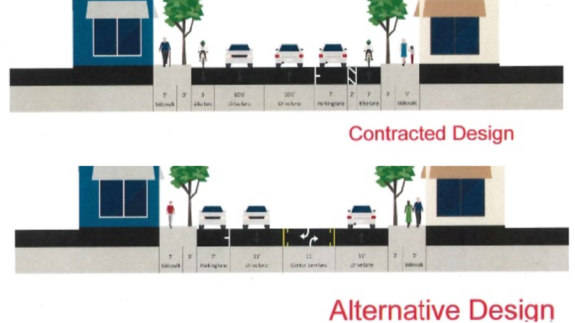 Remember the $10,000 of bicycle safety funds Councilmember Rob Johnson and Mayor Jenny Durkan spent on a confidential mediation effort to see if there was any way for bike lane opponents and supporters to agree on a plan for the street? That didn’t really work.

The result of those meetings is a new street design option that would remove the bike lanes from the street. But it would also remove the on-street car parking that bike lane opponents have been saying they want to protect. Instead, there would be a new center turn lane. The decision is in Mayor Durkan’s hands now.

“The Mayor’s Office will make a final decision on 35th Avenue NE’s new street configuration by the end of the year – choosing between the current “contracted design” and a new “alternative” that closely resembles a suggestion made by Save35th leadership last fall,” the pro-bike lane group Safe 35th Ave NE wrote in an update to their online petition. “We hold firm that the contracted design already represents a compromise, and that the alternative would  be less safe, and would not serve the needs of the community.”

Let’s get one thing perfectly straight: Removing an already designed and contracted plan for bike lanes that were designed in accordance with Seattle’s unanimously-approved Bicycle Master Plan is not a compromise just because they are also removing parking. Without bike lanes, people biking on 35th will be less safe, and the city will be less able to meet its biking goals.

Mayor Durkan should reject this new design option and stick with the contracted design that meets our city’s established and Council-approved transportation policies.

The talks did come up with some points of agreement. Crosswalks should be improved, for example. Everyone agrees about that. And there may be a couple intersections where left turn signals should be separate from through traffic.

But the central disagreement remains quite simple: Some people don’t want there to be bike lanes, and some people do. And the people who want the bike lanes have the backing of years of Council-approved city transportation policy and an already-signed construction contract on their side.

“All users of 35th, including the people who ride bikes – or want to – should be able to safely get to businesses and residences,” the Safe 35th group wrote. “Bike lanes also provide an additional level of safety and comfort for pedestrians that would not be delivered by the ‘alternative.'”

Mayor Durkan should back up her city’s policies here, citing the goals of Bicycle Master Plan as her justification: Ridership, safety, connectivity, equity and livability. 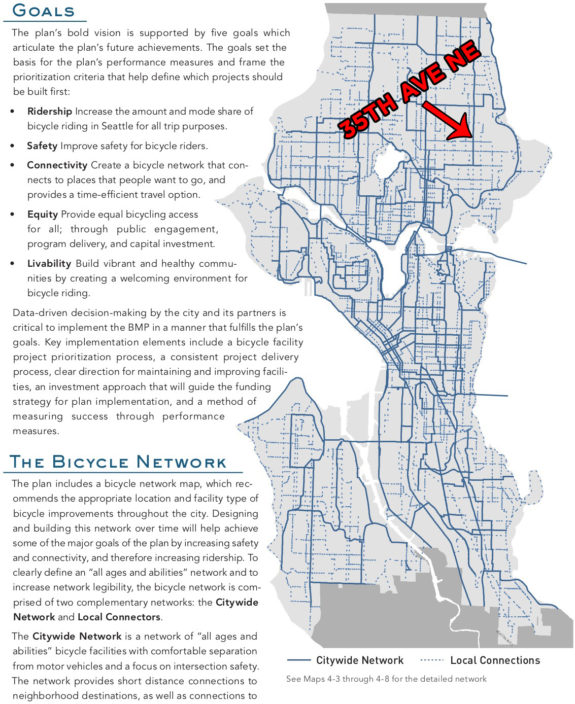