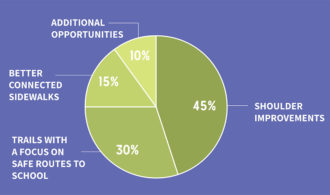 Planned spending for the failed SAFE Mobility Levy, from the City of Bainbridge.

Buried in the election results this week was a somewhat disappointing result over on Bainbridge Island. The city’s modest SAFE Mobility Levy lost, with the ongoing result sitting at 45–55 as of Thursday morning.

The levy would have raised $15 million over seven years to fund sidewalks, Safe Routes to School and wider shoulders, which serve as walking and biking space on the island’s roads.

The failure came as a surprise to Demi Allen, a Bainbridge resident who worked to develop and support the levy effort.

“I continue to believe that a high percentage of residents on the island want better facilities for walking and biking,” he said. But clearly more needed to be done to gather support for the levy vote.

“In retrospect, it seems more needed to be done to get out to people where they were and make sure they understood what was proposed and what was possible to achieve through the levy.”

The Bainbridge Mobility Alliance conducted a survey in the spring that showed a high level of support for a ballot measure like the one that ended up on the ballot, Allen said. Ten percent of island adults responded with 70 percent in favor. But respondents self-selected, so it was not a scientific random survey (those can be expensive to conduct).

One concern they heard often was that the levy was too open-ended, with the specific projects to be selected later.

As for now, supporters are taking some time to figure out what happened, who they didn’t reach and how they could make a levy more people would support.

“We want to make sure that the next time we go to voters that we have a package that’s really on-target,” said Allen.