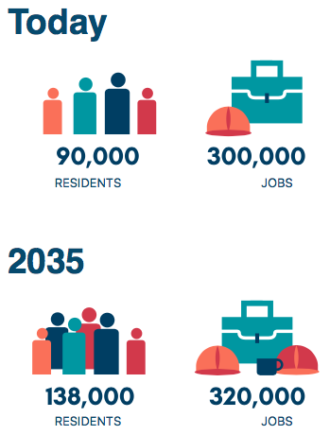 The Imagine Greater Downtown inter-agency partnership is hosting an open house Thursday (tomorrow!) to gather your “big ideas for great public places and lively streets in the heart of Seattle.”

I know, I know, didn’t we just do this, like, two years ago? And didn’t that effort include a project list of bold ideas? Well, that was when it was called One Center City, the part of the SDOT, King County Metro, Sound Transit and Downtown Seattle Association partnership focused on near-term projects. Imagine Greater Downtown is focused on the mid-term and long-term, looking to 2035.

By 2035, the entire Bicycle Master Plan is supposed to be completed. That means the bike network in the study area should look something like this (each line may move a block or two based on project design, but this density of bike routes is needed to meet the plan’s goals): 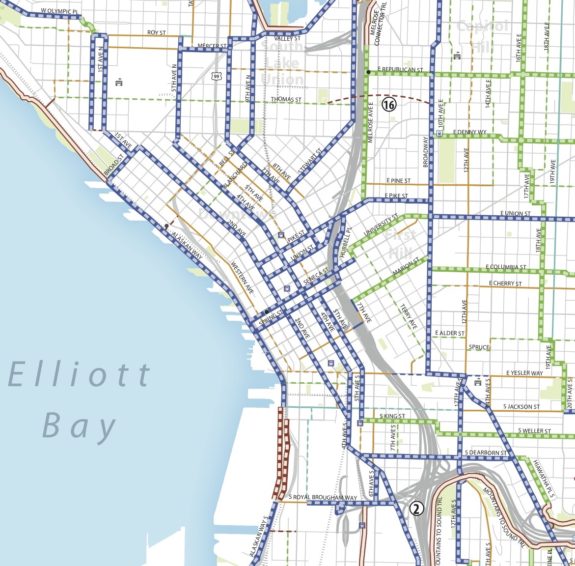 So, uh, Seattle’s got some work to do.

Building the Basic Bike Network is a short-term project. By 2035, the city’s goal should be to have, as Councilmember Teresa Mosqueda put it, an ALEGRA (“all ages, languages, ethnicities, genders, races and abilities”) bike network at least as dense and connected as the Bike Master Plan map above. And if the city were to implement some form of equitable congestion pricing, the bike route options would expand even further.

Since the team is asking for “big ideas,” let’s talk about connecting South Lake Union to Capitol Hill. On a bike, Denny Way is the only direct option today. But yikes. The Bicycle Master Plan notes the need for this connection, drawing a dotted arc to note that it is a “catalyst project.” That’s the term the plan uses for bike network needs that would require a major project to complete. Funding for these projects is so unknown and likely large that they were left out of the plan’s total funding estimate and mileage. You can think of them more as dream projects.

The SLU-Hill project is described as an “I-5 crossing to better facilitate bicycle and pedestrian movement between South Lake Union and Capitol Hill. Innovative solutions could also serve as a tourist attraction with great views.” What does that mean? You tell me! Perhaps this could also be part of the Lid I-5 vision?

Or how about connecting Pioneer Square to the International District? That seems like it should be a lot easier, but SDOT is struggling to figure it out. But with some significant investment to improve walking and biking access across the train tracks, there are some really great possibilities. This is especially true if more and more of the Century Link Field parking lot becomes housing and businesses (which it should).

Or how about connecting the downtown bike network to the Mountains to Sound Trail on Beacon Hill? Bike lanes on the Jose Rizal Bridge would get folks to King Street, but imagine a trail that somehow safely passes through the horrendous barrier that is the I-5/I-90 interchange? This could not only serve as a connection to downtown, but also a much-needed connection from Beacon Hill to Sodo that doesn’t involve intense climbs up hills like Holgate. And wouldn’t it be cool if the “Mountains to Sound” Trail actually, you know, reached the Sound?

Let us know what other ideas you have in comments below. And, of course, go to the open house or Imagine Greater Downtown website and let them know, too.

What are your BIG IDEAS?

We are holding an open house for you to provide your thoughts and big ideas for great public places and lively streets in the heart of Seattle. The future of greater downtown belongs to us all and your participation can help shape what it might look like in 2035.

• Learn about big ideas posed by the community, comment and add your own
• Get inspired by other great streets and spaces from around the world
• Participate in conversations about greater downtown

Free and open to all. Kids are welcome!

Founder and Editor of Seattle Bike Blog.
View all posts by Tom Fucoloro →
This entry was posted in news and tagged imagine greater downtown, one center city. Bookmark the permalink.