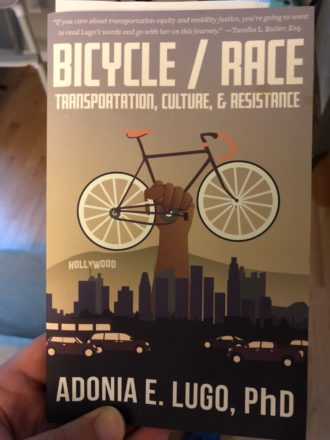 Lugo lived in Seattle for a spell a few years back while working on her anthropology dissertation on bicycle culture. Before that, she was a founder of Los Angeles’ massive open streets event CicLAvia. While in Seattle, she created the Seattle Bike Justice Project and helped Seattle Bike Blog organize the 2011 Safe Streets Social. Since leaving Seattle, Lugo has worked for the League of American Bicyclists, has contributed to and edited the academic collection Bicycle Justice and Urban Transformation, and has been an organizer of The Untokening.

Basically, Adonia is awesome (and, full disclosure, a friend), and you should go to G&O Family Cyclery in Greenwood at 6 p.m. Saturday evening to hear her speak.

As an anthropologist, much of her work is very academic. But Bicycle/Race, published this year by Microcosm Publishing, is written for everyone, reading more like a memoir of her adventures studying and leading US bike culture.

Join G & O Family Cyclery for a reading and discussion with Dr. Adonia Lugo on her new book Bicycle / Race: Transportation, Culture and Resistance. Come on in to the shop and pick up a copy of her book now!

Bicycle / Race paints an unforgettable picture of Los Angeles—and the United States—from the perspective of two wheels. This is a book of borderlands and intersections, a cautionary tale about the dangers of putting infrastructure before culture, and a coming-of-age story about power and identity. The colonial history of southern California is interwoven through Adonia Lugo’s story of growing up Chicana in Orange County, becoming a bicycle anthropologist, and co-founding Los Angeles’s hallmark open streets cycling event, CicLAvia, along the way. When she takes on racism in the world of national bicycle advocacy in Washington, DC, she finds her voice and heads back to LA to organize the movement for environmental justice in active transportation.

In the tradition of City of Quartz, this book will forever change the way you see Los Angeles, race and class in the United States, and the streets and people around you wherever you live.

Cultural anthropologist Adonia E. Lugo, PhD, joined the Urban Sustainability team at AULA in the spring of 2015. Dr. Lugo began investigating sustainable infrastructure during her graduate studies at UC Irvine, when she co-created the bicycle event CicLAvia in Los Angeles. After receiving her doctorate in 2013, she worked at the League of American Bicyclists in Washington, D.C. as a national leader in building better “human infrastructure” (diverse social networks and cultural norms) to promote bicycling. Today, Dr. Lugo looks for ways to bring her racial justice expertise from the field of bicycle advocacy into equitable and sustainable mobility at large. She is currently collaborating with partners around the country to define “mobility justice,” a concept that highlights the complex difficulties that people of color and other marginalized groups face both when traveling through public spaces and in urban planning and development processes.

In addition to her role as an educator at AULA, Dr. Lugo is involved in a number of projects designed to expand support for mobility justice. She is an advisory board co-chair with People for Mobility Justice, a core organizer of The Untokening, and the manager of the Bike Equity Network email list. Her book, Bicycle/Race: Transportation, Culture, & Resistance, was published in 2018.

This entry was posted in news and tagged adonia lugo, bicycle/race. Bookmark the permalink.