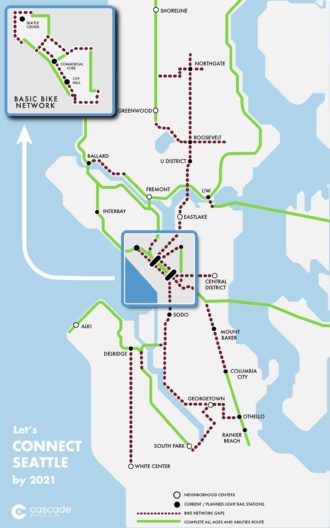 Seattle’s Bicycle Master Plan identifies 474 miles of new or upgraded bike routes to be constructed by 2034. But Cascade Bicycle Club launched a campaign this week called Connect Seattle to encourage the city to follow through on a handful of major city-wide routes by 2021.

The hard work to make this citywide vision a reality will likely happen at the neighborhood level, as has been the case for nearly every bike lane project in the city. But perhaps it would be good to have a reminder of how each project fits into a citywide vision.

The campaign map is like a pared-down version of Seattle Neighborhood Greenways’ Urban Village Bike Map, which envisions safe and comfortable bike routes connecting all of the city’s designated and planned urban villages to create a city-wide bike network. SNG is not listed as a partner in the campaign as they were for the Basic Bike Network.

The goal of the campaign is to get to 10 percent mode share by completing these projects over the next three years. There are certainly many important projects and neighborhoods missing from this map. But if these routes were all completed by 2021, much of the city would be much easier and safer to navigate by bike.

As more Seattleites look for fast, affordable transportation options, we envision a Seattle where 1 in 10 trips is made by bike.

Making that vision a reality isn’t about hitting a magic number. It’s about creating happier, healthier and more inclusive neighborhoods – connected by bike – all across Seattle. We envision a Seattle where everyone, regardless of how we look or where we live, has the choice to hop on a bike to get to the store, to commute to school or work, or to cross town to visit friends and family for dinner.

1 in 10 trips by bike isn’t just an aspirational goal.

A PATH TOWARDS 1 IN 10 TRIPS BY BIKE: CONNECT SEATTLE.

Here’s what it means: If Seattle follows through on a handful of projects that are already in the works – and completes them over the next three years  – we’ll have a basic network of bikeways across the city by 2021. When we Connect Seattle, we connect people to the places they need and want to go by bike. And that means more people, taking more trips by bike.

Founder and Editor of Seattle Bike Blog.
View all posts by Tom Fucoloro →
This entry was posted in news and tagged cascade bicycle club, connect seattle. Bookmark the permalink.