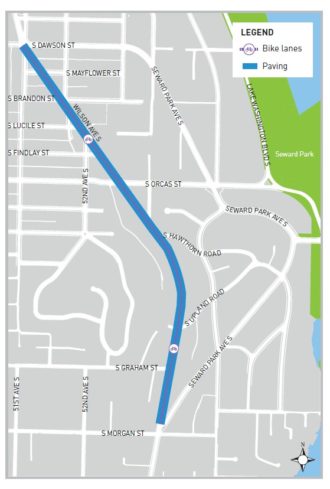 Wilson Ave S is a true rarity in the hilly neighborhood above Seward Park: It is relatively flat and direct.

Well, OK, the whole street isn’t flat. But the 0.8 miles of the street that the Seattle Department of Transportation is repaving this year are surprisingly flat, connecting the very popular Lake Washington Loop bike route to the business district at S Dawson Street (Third Place Books) and the existing painted bike lanes on 50th Ave S that connect to the bike lanes on S Genesee St into Columbia City.

Workers have already started work to repave this stretch, and plans call for a northbound bike lane protected by parked cars and a southbound painted bike lane as well as new curb ramps all along the route. This meets the criteria in the Bicycle Master Plan, which calls for “in-street, minor separation” bike lanes here. In fact, this is one of the few new protected bike lanes planned in all of SE Seattle.

Though it is quite rare for designs to change once construction has begun, SDOT is holding a public meeting to get feedback about a change in the parking plan Thursday. People who bike are encouraged to attend to weigh in, but the proposed changes still include bike lanes. Details from the project page:

The addition of the bike lanes should calm traffic a bit by narrowing the very wide lanes. Studies have consistently shown that wide lanes encourage speeding. That alone will hopefully help calm the sideswipe problem.

SDOT’s proposed change would have parking switch from the east side to the west side between Orcas and Morgan Streets. That means part of each bike lane would be protected some of the time and paint-only some of the time under this compromise plan.

SDOT also says it will monitor crossings along the stretch to see if marked crosswalks are needed.

A parking utilization study found such low utilization rates along the project area that all the parking could fit on one side of the street and still have a lot of open spaces.

The cost to repave the street is $2.55 million, paid for largely by the Move Seattle Levy. Paving projects are the most cost-effective way to build out stretches of the bike network. They have to put the street back together somehow, so putting it back with bike lanes doesn’t add much to the bottom line.