We are building a backyard cottage, and city rules make no sense + Hearing Thursday 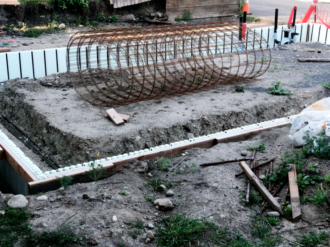 Our daughter Fiona will not have a closet in her room growing up because city rules for building backyard cottages require us to build an extra car parking space for a car we don’t own.

Debates over building codes and zoning often get bogged down in acronyms and percentages that lull most people to sleep. But the ongoing effort of trying to navigate today’s backyard cottage rules to build such a home in our friends’ backyard has made the effects of those obtuse codes and rules concrete for my spouse Kelli and I. And we’ve found that many rules just plain make no sense.

The good news is that the city, led by City Councilmember Mike O’Brien, is trying to change the rules to make it easier for people to build homes in their backyards. The bad news is that the Queen Anne Community Council successfully sued to delay these changes, requiring the city to spend years conducting an environmental megastudy (PDF) on the effects of such a rule change. The initial draft of that study is now out, and there will be a public hearing and open house about it 5:30 p.m. Thursday at City Hall. You can also comment online.

Here are just a few rules that could be changed, some of which I learned from the Beyond Backyard Cottages group and some of which my family and our friends discovered first hand:

These are just a handful of smart changes the city has studied. And, no surprise, the megastudy finds that implementing these changes would encourage the construction of more homes without having negative effects on neighborhoods.

What does this have to do with biking? Well, I am partly writing this because my family is in the process of building one of these, so I have a lot of thoughts and experiences to share. But the ability to build more homes in our city’s single family neighborhoods is about biking because transportation and land use are deeply intertwined. As more people are able to live within easy biking distance of jobs, parks, schools and businesses, biking becomes a more broadly viable mode of transportation.

And both biking and backyard cottages can be tools for affordability in this city as the cost of living skyrockets. For our family, they are both vital to our ability to stay and invest in this city we love.

We spent a year and a half putting offers on the most affordable one-bedroom condos and co-op units for sale anywhere within easy biking distance of the city center, but we were outbid every time by people with the means to offer a stack of cash on top of the asking price. Housing prices have since climbed even higher, and even the smallest condos are well out of reach. A quick glance at Zillow shows maybe three listings for small one-bedroom units listed below $300,000.

But you can build a larger two-bedroom backyard cottage for less than $300,000, and that will only be more true if the city moves forward with some of the more ambitious options in the environmental study. With the housing market what it is, building a backyard cottage is an almost magical way to build relatively affordable family-sized housing. 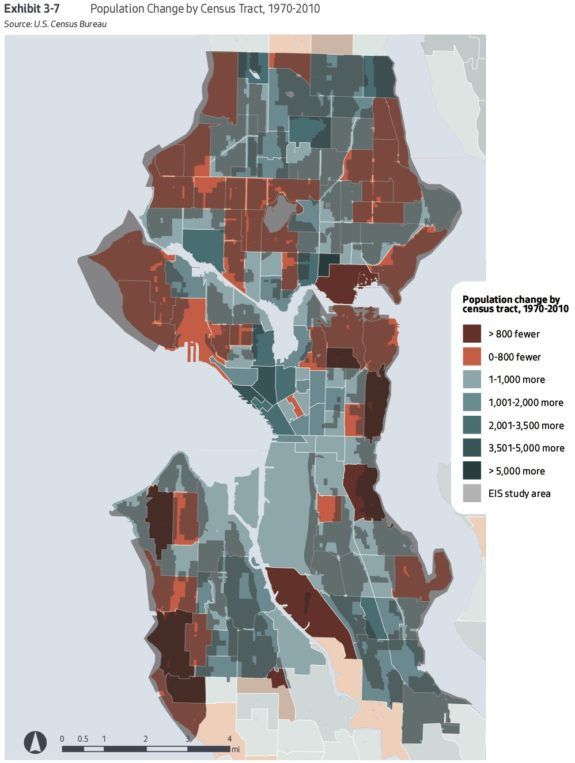 In huge swaths of Seattle’s single family zones, population has actually declined since 1970 even as the city’s population has ballooned. This is because apartments, duplexes and triplexes that were legal before the creation of single family zoning laws were replaced or renovated with houses for just one household. During a housing supply and affordability crisis, it is unconscionable that city zoning rules would allow so much residential land to depopulate.

As Erica Barnett at the C Is For Crank reports, the megastudy not only deems that the proposed changes would have little ill effect on neighborhoods, it also finds that single family zoning is an ongoing enforcer of the racist legacy of redlining in our city. There is a ton of information in the document, but this chart illustrates the disparity well: 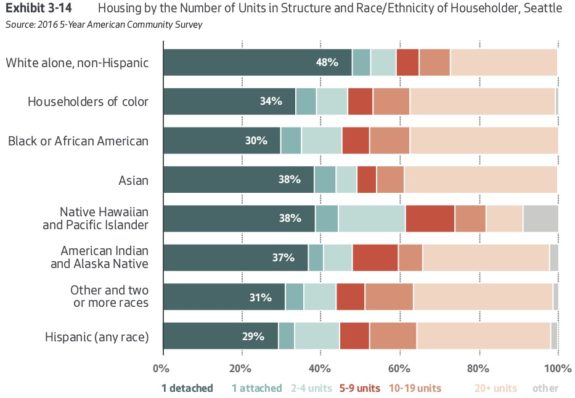 Living in a single family house is also a very strong determiner of wealth: 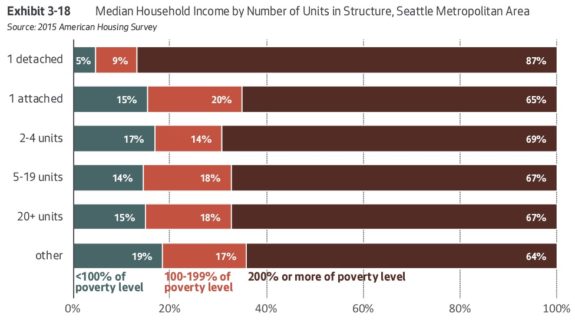 Now look at the map of single family zoning in Seattle, areas where the only form of housing legally allowed is the form of housing that is disproportionately white and wealthy: 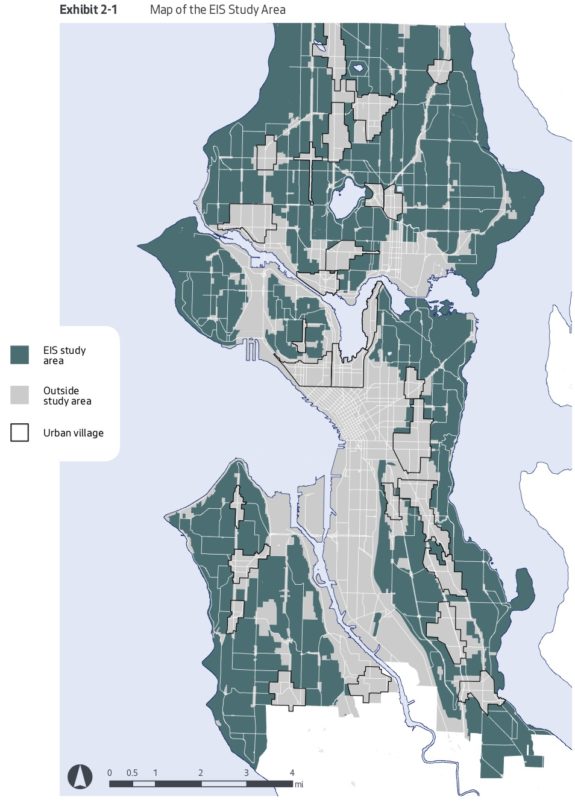 Owning a single family house does not make you racist, but single family zoning is a racist rule. It is also economically unjust. Backyard cottages are not going to fix the problem here, but they are at least a point of entry for more people. They’re a good start.

Founder and Editor of Seattle Bike Blog.
View all posts by Tom Fucoloro →
This entry was posted in news and tagged adu, Backyard cottages, dadu. Bookmark the permalink.

34 Responses to We are building a backyard cottage, and city rules make no sense + Hearing Thursday