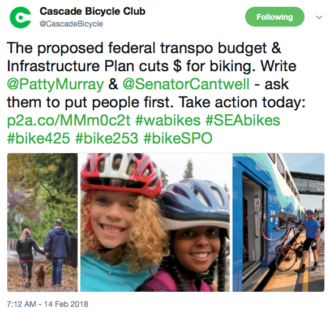 In an insult I doubt Donald Trump will take too hard, Cascade Bicycle Club said that his infrastructure plan is a “bad deal for biking in Washington.”

At a time when the region is investing so much local funding in its own streets and mass transit service, a plan that cuts Federal support for local initiatives is just nonsense. The Move Seattle levy and the Sound Transit 2 and 3 initiatives passed assuming some Federal support for major project elements. Because local, regional and federal partnerships have long been the way major infrastructure gets built in the U.S.

But the Trump program would cut some of these major programs, threatening delays or shortfalls for projects our growing region desperately needs.

Cascade has put together a handy online form so you can message your Senators and Representatives to urge them not to support the Trump infrastructure cuts. From Cascade:

Just as bicycling is taking off across Washington state, the Trump infrastructure plan and 2019 budget puts progress at risk, with:

Washingtonians deserve a fair deal, not a plan for infrastructure that cuts some of the most important projects and programs that build stronger, safer, and more equitable communities.