What can we learn from this scary close call video?

OK, Seattle, we need to talk about this close call video going around.

David Seater, who is the Chair of Seattle’s volunteer Pedestrian Advisory Board, was biking uphill on Pine Street on Capitol Hill earlier this week when someone driving a pickup chose to lay on the horn and make a purposeful, extremely close pass. Luck is the only reason the person driving didn’t hit Seater, causing serious injury or worse.

I am not posting this video to stoke anger. I also don’t want it to further scare people from biking, which is what the person driving here wants. But the video has ignited all kinds of bigger conversations, from questions about what constitutes a criminal threat when your weapon is a car to why someone biking might not always be in the bike lane. So if you’re feeling up to it (it’s troubling), give the short video a watch:

Hey @SeattlePD, how do I report an attempted murder? pic.twitter.com/Zde8Y7hTy1

Before we get into the response (or lack thereof) from Seattle Police, it’s important to understand something about Go Pro videos: They use a wide angle lens. That means, like the passenger-side mirror on a car, objects are closer than they appear. This is especially true on the edges of the screen. A wide angle lens allows the camera to capture more of what happens around it, but it also means that both the truck passing and the bike lane are closer to Seater than they appear in the video. In the screenshot below, the truck is within a couple inches of him: 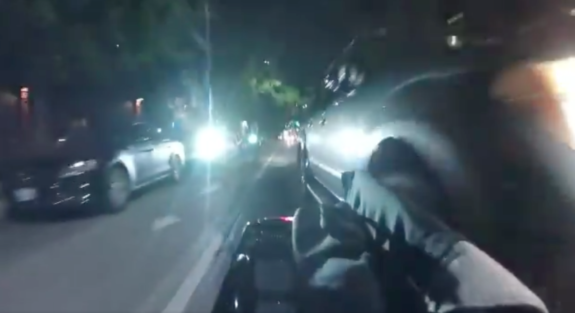 So when Seater calls this “attempted murder,” this is why. Someone honks (so you know it was purposeful, not accidental) and uses their truck as a weapon to take a swing at him, missing by a minuscule margin.

Sadly, incidents like this are not rare. But this time, there’s video.

That’s why the Seattle Police response via Twitter was so frustrating:

An officer would typically need to witness a violation in-progress to be able to stop the driver & confirm their ID to issue a citation.2/2

Former Mayor Mike McGinn called SPD out on this answer:

And why do I give a shit? Because there are drivers that intentionally play with lives because “that’s what the bike lane is for dude”

What if SPD had video of a bicyclist pointing a gun at a car blocking the bike lane, saying “that’s what the traffic lane is for dude”

This is car culture at work. If someone swung a bat or knife an inch away from someone, that’s definitely an attempt at assault at least. The person driving in this video turned their truck into a weapon the second he decided to accelerate toward Seater. Laying on the horn is clear evidence that the person driving knew their car had become a weapon. But for some reason, because it was a pickup truck instead of a bat, it is a traffic infraction and not a crime (or so says SPD). That makes no sense.

The video then takes another turn when the person driving waits for Seater to catch up (so, you know, they could have just been patient in the first place and got there at the same time). The guy rolls down his window and says, “That’s what the bike lane is for, dude.”

First off, fuck you, dude. It’s not your place to tell anyone else on the road what they should do. Take care of your own house first. It is never OK to attack a stranger. You are menace with anger issues you need to get under control before you kill someone. You aren’t so important that you have any right to treat your neighbors this way.

And Seater doesn’t owe you an explanation, either. The law allows him to bike in the general traffic lane. It doesn’t, however, allow you to harass and threaten people.

Seater was clearly passing someone else, so that’s why he wasn’t in the bike lane.

Further exacerbating the issue, that bike lane — like so many in Seattle — is far too skinny and located squarely in the “door zone” of parked cars. Biking safely requires that you imagine every parked car door swinging open. You should always ride outside this imaginary “door zone,” even if that means biking outside a bike lane.

And the door zone changes depending on the type of car and how well the driver parked. In this case, I’ve highlighted the door zone from the video based on the SUV (which also has its lights on, increasing the chance that a door would open): 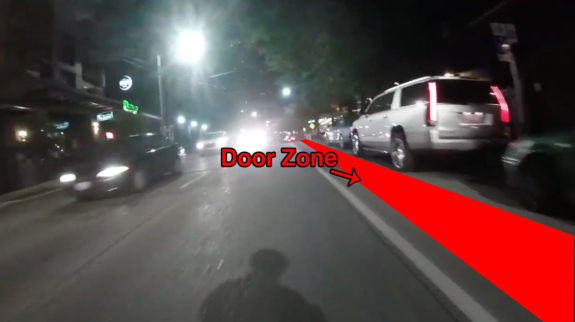 So if you see someone biking on or near the left line of the bike lane, this is why. They aren’t trying to annoy you, they are trying to get where they’re going safely.

Seater is outside the bike lane because he passed someone, but he also doesn’t have very much space to get right due to the door zone. He needs to be a safe place in case someone in that SUV flings the door open. And that’s what’s most important when traveling in a city by any mode: Avoiding risk so you can get home safely.

Why does the city build bike lanes that are largely located within such a dangerous door zone? Good question! That’s why safe streets advocates have been working so hard to push for protected bike lanes that remove this danger and clear up confusion. The city has a lot of work to do.

On the flip side, this asshole is demonstrating one reason why we need bike lanes at all. He was trying to scare Seater to make a point, but really he just made the case for why we need to build more protected bike lanes much more quickly.

Founder and Editor of Seattle Bike Blog.
View all posts by Tom Fucoloro →
This entry was posted in news and tagged capitol hill, david seater, pine, spd. Bookmark the permalink.

52 Responses to What can we learn from this scary close call video?