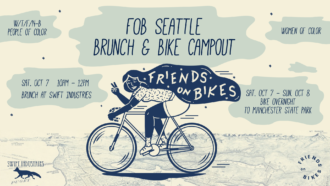 SJ moved to Seattle via Boston and Montreal, and has been involved in the bike industry now on both coasts. And they have seen a persistent problem.

“Certain cultures and certain genders aren’t associated with bicycling even though all those people do bicycle,” they said. One example of how this problem manifests is in people’s experiences in many bike shops.

“A lot of women, especially women of color, would go into bike shops and have a bad experience,” they said. And that bad experience means even though someone might bike to get around, a bad bike shop experience might dissuade them from learning more.

So SJ started looking for ways to create a bike community where women/trans/femme/non-binary people of color come together and have fun on bikes. They found Friends on Bikes down in Portland, joined a bike overnight with the group down there and was inspired to start a Seattle chapter.

SJ said they were listening to the podcast Hella Black Hella Seattle, and loved an idea brought up about “curated space.” That’s how SJ sees Friends on Bikes. It’s a chance for people to come together and talk about what kind of biking they like to do, and share that with others.

SJ said the group is “a safe space for people out there who ride bikes or want to ride bikes.” And as they note, women are biggest untapped market for cycling growth in our city and country. Indeed, a huge percentage of Seattle’s newest bike commuters are women, Seattle Bike Blog found after crunching 2015 Census data. But there is still a ton of room for that to grow.

SJ is hosting a brunch Saturday at the Swift Industries headquarters in Pioneer Square to kick off the group. Interested people are also invited to join a relatively easy (optional) bike camping overnight trip afterwards.

“Everybody bikes differently,” they said. “Brunch can be a relaxed forum where lots of people can come forward and say, this is the kind of biking I do.”

Calling all W/T/F/NB of Color!! Join us to get the SEA edition started!! Saturday, October 7th we’re meeting up at Swift HQ with Molly Sugar for a brunch hang out. Get to know other people of color who get rad on bikes and learn more about FOB. Bring your ideas too! Where do you want to ride? What types of rides do you want to go on? We’ll have donuts, coffee, vinyl stickers and good company.

At 12noon, we’ll depart for an optional overnight at Manchester State Park. It’s about a 38 mile round trip, which includes the ferry from Fauntleroy to Southworth.

Calling all W/T/F/N-B people of color in Seattle! SJ is leading the FOB Seattle chapter! Spread the word ~ now let's get rad on bikes! ✌🏾✌🏿 pic.twitter.com/LPsmatfWK2

Founder and Editor of Seattle Bike Blog.
View all posts by Tom Fucoloro →
This entry was posted in news and tagged friends on bikes, SJ. Bookmark the permalink.