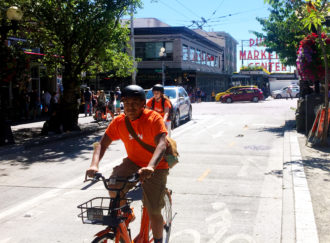 Spin outreach staff spreading the word about the company on opening day in July.

Spin and LimeBike have both announced new ways for people without smart phones, data plans or a credit/debit card to access their bike share services.

People will soon be able to buy pre-paid Spin Access cards at Bike Works in Columbia City that include an access code and a phone number to text to unlock a bike. So you still need a phone, but any phone that can send text messages should work.

And to make the Spin program even better, anyone with an ORCA Lift transit card can get the passes for half price. That means 50-cent rides for people who have already qualified for the low-income transit pass. Just show your ORCA Lift card at the register.

This announcement comes about a week after LimeBike started accepting cash payments at its Fremont headquarters. In the LimeBike program, users can call a phone number to unlock a bike after loading cash into their accounts in person. And though LimeBike did not mention a discount for ORCA Life users, the company said rides for students only cost 50 cents.

Seriously, what even costs 50 cents anymore? A gum ball? You could take three discount Spin trips for the cost of a single discount transit fare. If your work is within a half hour ride, a week of round trip commutes would cost $5 (if it is within an hour ride, your week’s commute bill would be $10) (CORRECTED MATH). That’s a week of biking for a fraction of the cost of a single Uber or Lyft ride. And since the average cost to own, operate, insure and maintain a car in the U.S. is $8,500 per year, that’s equivalent to nearly 17,000 discount Spin rides. If you averaged three rides per day, it would take nearly 16 years to reach the cost of a single year of car ownership. The difference is so vast that the math gets a little silly.

In a city where everything just keeps getting more expensive, these companies are offering new services that slash transportation costs. Transportation is one of the biggest costs of living, so that’s a pretty big deal.

Of course, we still need a lot more bikes on the ground before the sevices will be reliable enough that people who live outside the city’s central neighborhoods can depend on them. The more bikes there are, the more likely it will be that a bike is within a short walk of you at any time.

More bikes are on the way every day, and the cap is set to double to 2,000 bikes per company September 7. The cap will be lifted October 7, kicking off the next phase of this bike share experiment.

It’s really great to see these companies competing to better serve people with lower incomes. When your product is so affordable, you don’t need to compete only for the wealthy residents like so many other businesses in town. The bike access card scheme Spin announced really sounds like it could scale well, and I know LimeBike’s call-a-bike program is just the beginning for them. Imagine if you could buy pre-paid bike share cards at any corner store or out of snack vending machines.

Spin and LimeBike have been operating in Seattle for just a month, and already they are innovating and competing in exciting ways. They are providing a huge public service, and the city should start thinking about how it can better leverage their services to improve affordable mobility. The most obvious way to do this is to accelerate building the Basic Bike Network downtown, which would be a boon to safety for all users, including bike share riders.

The city should also up its bike parking game, especially on-street bike parking corrals that free up sidewalk space. So far, clogged sidewalks have not been a huge issue (aside from a few cases, of course), which is great. But adding more bikes will likely lead to more cases of bikes getting in the way, so expanding dedicated bike parking space is a good way to get ahead of that possible issue and provide more bike access for all bike users at the same time. Perhaps the city could also extend existing bike corrals to include more space for the free-standing bikes, which may also help keep the bike racks open for people who need to lock up.

The city, King County and Sound Transit should also come up with ways to better accommodate and encourage bike share at major transit hubs. For example, how can the agencies and these bike share companies partner to make sure transit users can depend on bikes being available for making the final leg of their trips? People should be able to hop on express transit routes knowing they can transfer to a bike when they get to, say, King Street Station or Columbia City Station or the West Seattle Junction or Campus Parkway. If the transfer to bike is reliable, that helps encourage transit use because users can hop on an express route even if their final destination is not served well by connecting transit lines. Bike share is the perfect solution to the last-mile problem, and everyone should be thinking about how to better work together.