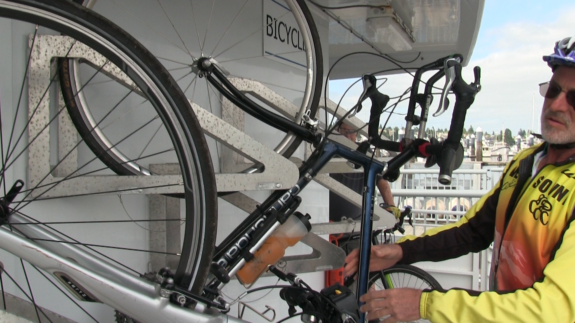 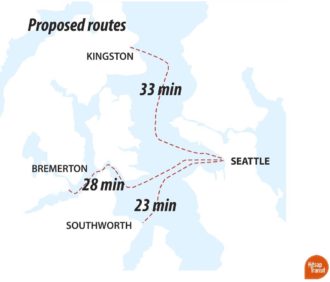 Kitsap Transit is set to start service on the first of its new walk-on fast ferries to downtown Seattle Monday.

The first route will provide a much faster alternative to the Washington State Ferry to Bremerton (about a half hour vs an hour on the state ferry). You can reserve a seat online, though limited walk-up tickets will also be available.

But many (most?) people hoping to bring their bikes on the new ferry may find that their rides don’t fit on the custom hanging bike racks installed on the Rich Passage 1 vessel, the Kitsap Sun reports.

Bikes with fenders (!), fat tires, some kinds of front racks, or disk brakes will not fit, Kitsap Transit cautions. E-bikes are also not allowed due to weight concerns. And it seems unlikely many cargo or family bikes will fit even if they don’t have e-assist motors, fenders or disk brakes.

Kitsap Transit is aware of the issue and is working with the vessel manufacturer on a solution:

“We have shared our concerns with the boat’s manufacturer and their engineers are working on a fix for the Rich Passage 1,” said Kitsap Transit spokesperson Sanjay Bhatt. “Once we have an idea of what that fix looks like, we will be able to give the bicycle community an update on our timeline for retrofitting the vessel.”

UPDATE 7/14: “Passengers departing Bremerton can use a newly installed test bike rack at the head of the gangway to see if their bicycle fits in the fast-ferry’s bike racks,” Kitsap Transit said in a press release. “Kitsap Transit is also coordinating with King County on the installation of a test bike rack near the dock for passengers departing Seattle. Based on community feedback, Kitsap Transit is expediting plans to retrofit its fast ferry over the winter to accommodate a wider variety of bicycles and exploring the options with bike-rack designers.”

Kitsap Transit recently hosted a workshop with West Sound Cycle Club to try several different bikes on the racks to see what fits.

“We got some useful feedback that we relayed to the firm that built the racks and is working on a solution,” said Bhatt.

Here’s another angle of the bike rack design: 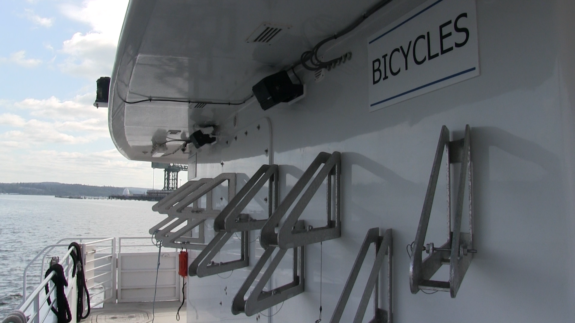 This seems like a classic case of designing a clever bike rack that works really well, but with only one type of bike. But disk brakes are already very common and are only becoming more standard across the bike industry. Fat tires are very popular these days, as well. And this is rainy Western Washington, so almost everyone has fenders on their bikes if they are using them for everyday, year-round transportation.

Ironically, many people who ride fenderless road bikes that will work on the bike racks also wear bike cleat shoes, which also are not allowed on the ferry.

For comparison, the King County Water Taxi bike parking has more deck space to work with, so bikes can simply be held upright by floor racks like this: 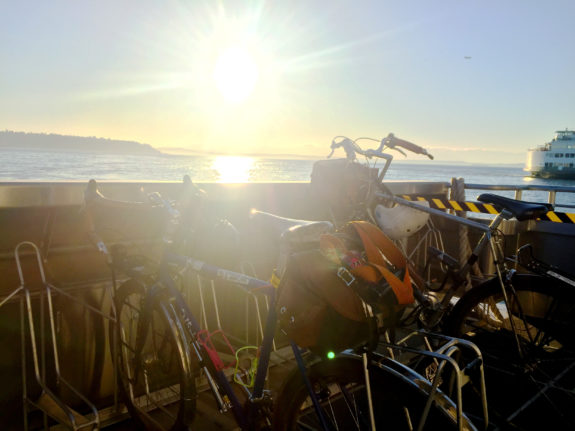 With a bit of work, you can even get your bike on the little Kitsap Transit ferry from Bremerton and Port Orchard. If you are very tenacious, you can even get a big family bike on it, as demonstrated by Madi Carlson of FamilyRide.

Hopefully the manufacturer can come up with a design that at least works on most people’s bikes, though hanging bikes will always be a barrier for people who are not able to easily lift them. Some more deck space would be needed to accommodate bigger family and cargo bikes that cannot be hung, though the hydrofoil vessel also has some rather specific weight balance considerations that could make heavy bikes harder to accommodate.

For now, at least people have the option to take their bikes on the state ferry instead. Or people starting their trips in Kitsap can lock their bikes in Bremerton and take a private bike share bike when they get into Seattle.

However, bike parking is an absolutely critical issue for the Seattle-to-Kingston route, which is scheduled to start operations in a year. That ferry will revolutionize Kitsap and Olympic Peninsula bike connections to Seattle, cutting about 1:30 of biking out of the trip from downtown Seattle to Kingston.

If you are headed to Port Gamble, for example, the trip by Fast Ferry and bike will only take about 1:15. That’s about 15 minutes faster than driving (assuming you can even make it on the first ferry with your car) and about an 1:45 faster than it takes to bike there today (using Google Maps estimates).

So here’s to hoping Kitsap Transit and the manufacturer improve the bike carrying capacity of these ferries. Because they could do wonders for regional bike transportation, both for commuting and for regional adventuring.

Here’s the current warning for people trying to bring bikes on the Bremerton Fast Ferry.

Bicycles are welcome aboard on a first-come first-served basis. Crews will direct passengers on secure placement of their bikes in one of the 12 exterior racks. The current design of the existing bike rack (each with inside openings of 2.25″) makes it impossible to safely secure bikes with fenders, disc brakes, or balloon tires. Vessel weight restrictions also prohibit electric bikes. Shoes with metal sports cleats are not allowed in passenger areas.

UPDATE: More on how the bike rack design came to be, from Bhatt:

We hear the concerns about the bike racks on the Rich Passage 1 not fitting some bicycles with disc brakes, fenders or balloon tires. We are working with the shipyard that built the vessel to see if we can come up with a better solution that will cover a broader variety of bicycles. Because we don’t know what that solution is yet, we don’t know how much it would cost or what it would entail.

As the old saying goes, hindsight is 20/20. The RP1’s bike racks were designed in 2009, before significant shifts happened in bicycle braking technology and consumer preferences. In the past two years, disc brakes have become popular on road bikes. Electric bikes also are catching on, but we can’t allow them because they are heavier and could throw off balance our required weight ratios for operations.

It’s also worth noting that it would be difficult for the bike racks on our current and future vessels to accommodate “all or most bikes” because there is no standard in the bicycle industry: There are more than a dozen categories of bicycles, including road bikes, mountain bikes, hybrid bikes, cruiser bikes, city bikes, BMX bikes, folding bikes, recumbent bikes and tandem bikes.

Designing for such diversity forces tradeoffs: Wider bike racks would accommodate more types of bicycles but take up more space, reducing the vessel’s bike capacity (fewer bikes). Our design for the RP1 and future vessels provides bike racks for 10 percent of passengers (i.e. 12 racks on the 118-seat RP1), a common industry ratio.

Founder and Editor of Seattle Bike Blog.
View all posts by Tom Fucoloro →
This entry was posted in news and tagged bremerton, kingston, kitsap peninsula, kitsap transit. Bookmark the permalink.