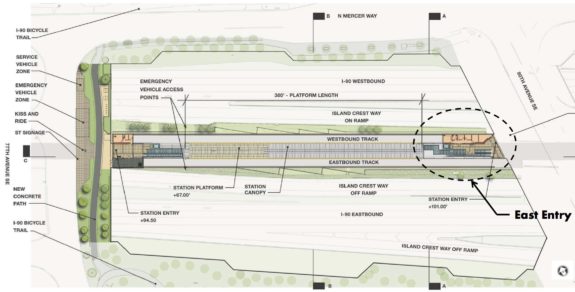 Mercer Island Station is adjacent to the I-90 Trail, and could be one of the region’s most bikeable stations. From a Sound Transit station design PDF.

Mercer Island’s decision to sue Sound Transit and WSDOT in large part over HOV lane access on I-90 did not make the island a lot friends among people across the region who worried the lawsuit could delay and add costs to East Link light rail service.

But after dropping some serious city cash on the legal action, the agencies reached a settlement with the island totaling $10 million, more than half of which is earmarked for street safety and projects to make it easier for island residents to bike and walk to the station. The other half is for building a parking garage “for the exclusive use of resident commuters,” which is just … ugh.

I’m not here to justify the city’s lawsuit or the settlement details. But assuming the Sound Transit Board approves it, it is what it is. So people who live, work, play or travel across Mercer Island should focus on making sure Mercer Island to invest the funds wisely to help make their light rail station the incredible asset it should be for the community.

The train is expected to take ten minutes to get to either downtown Seattle or Bellevue.

The city is hosting a meeting 7 – 8:30 p.m. tomorrow (June 22) in the West Mercer Elementary Gym to discuss how the city can invest these new funds:

Please join the City on June 22, from 7:00-8:30 pm, at West Mercer Elementary Gym, as we kickoff a community engagement process to determine how best to expend the traffic and safety funds secured in the draft settlement agreement with Sound Transit over the impacts of light rail construction and operation.

In the meantime, we invite your comments at: [email protected]

“The City has over $5.3 million available from Sound Transit to either address vehicle, bicycle and pedestrian access issues resulting from the closure of the center roadway or fund “last-mile solutions” that enable Islanders to access transit without driving to the Town Center,” City Manager Julie Underwood wrote in a letter to residents following the initial settlement deal (PDF). “The immediate priority will be funding street and intersection improvements that are identified once new traffic patterns are confirmed. In addition, Sound Transit will complete work on the most important street and intersection improvements that it had already committed to do.”