A trail over the 520 Bridge will revolutionize biking in the region. Bicycle travel times between many parts of Seattle and major Eastside communities will be slashed. Biking from UW to downtown Kirkland, for example, will be cut in half. Instead of an hour and a half (including some serious hills), the 520 Bridge Trail will allow people to casually make the trip in just 45 relatively flat minutes.

Not everyone has three hours a day to spend commuting. But an hour and a half? That’s comparable to taking the bus or driving on a bad traffic day. But it will be more reliable, much cheaper and a hell of a lot more fun to bike.

But you’ll have to keep being patient, since WSDOT has not yet announced an opening date for the trail.

“We’re still anticipating a bike path opening date sometime in the fall,” said project spokesperson Emily Durante. “We should have a better understanding of that timeline as we get closer to switching westbound vehicles onto the new structure later this summer.” 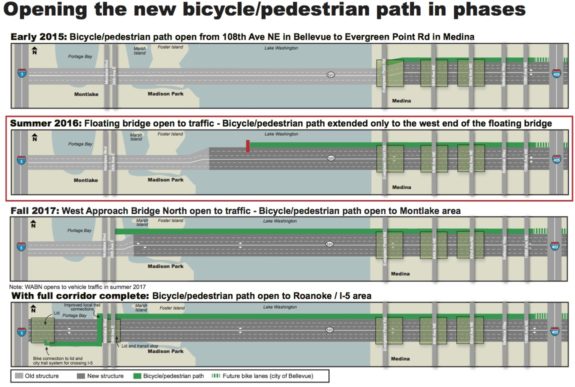 For a while after it first opens, the trail will dump people onto Montlake neighborhood streets. The grand plan to connect the trail to the Arboretum, UW, Portage Bay, the Montlake business district and, eventually, Roanoke Park on Capitol Hill still needs some work. It could be a decade before those plans are all constructed, since the Portage Bay Bridge is not scheduled to start its six years of work until 2020 at the earliest, and a second Montlake Bridge isn’t scheduled to open until 2027 or later (PDF factsheet). 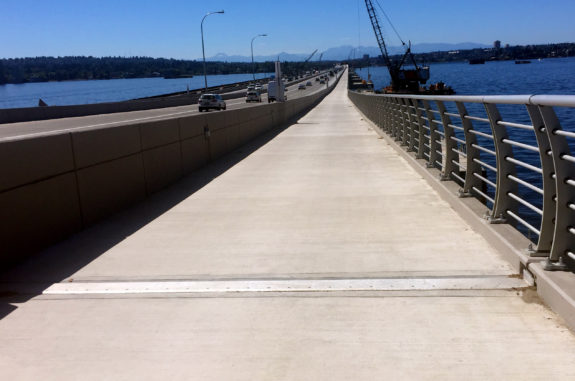 The trail attached to this $4.56 billion highway project does have one potentially serious problem: The plates covering every expansion gap are just jarring enough that I (and several readers who have contacted me) are worried some people will crash.

I’m aware this is going to seem nitpicky. If you look at the photo above, the plate covering the expansion gap doesn’t seem like much of an issue. And that’s part of the problem. 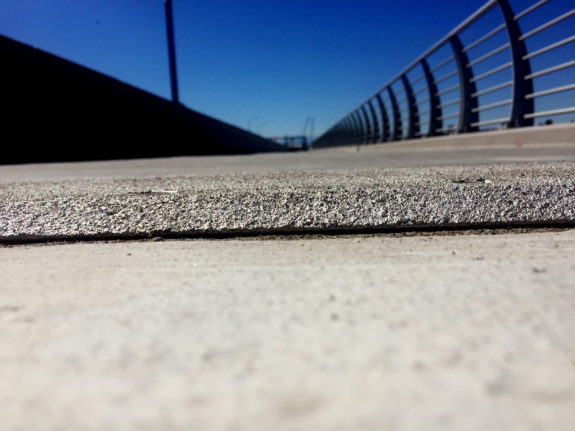 The expansion gap covers are a bit too jarring, especially since the rest of the trail is so smooth.

When I took my first test ride of the dead-end trail almost a year ago, I almost crashed when I hit the first plate. The trail is so new and smooth, I was sitting back with a comfortable grip on my handlebars looking out over the lake. When I hit the first plate, it packed a bigger punch than I was expecting, and I was barely able to keep my grip on the bars to keep from crashing. It feels like hitting a pothole.

I’m not the only person who has this concern. Carl, a reader who had not previously read my post about the bridge, wrote me an email recently saying the same thing: “Each time you ride across one of these joints you encounter a bump so harsh that you might be in danger of falling if you are not paying close attention and are not perfectly aligned.”

Carl also contacted WSDOT about the problem several times, but was rebuffed.

WSDOT confirmed that the agency has no plans to do anything about the plates other than to post a warning sign about them, saying “they are compliant with ADA and contract standards.” Carl noted that the plates appear to be designed basically to the ADA maximum allowed for bumps. 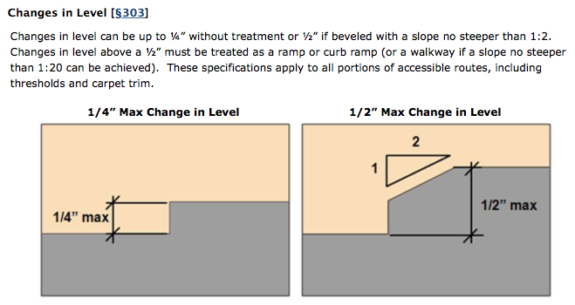 The trail plates appear to be engineered to the maximum level of bumpiness allowed under the Americans with Disabilities Act.

So while they may be technically compliant, they are as abruptly bumpy as legally possible. Here’s the full statement from Durante:

We’ve worked with our engineering team to evaluate options that ensure functionality and the safety of those enjoying the new path. To help ensure safety and alert bicyclists of the raised plates, we’re in the process of installing signage and warning paint to alert all users of the raised plates along the path.

The path design is based on structural requirements for the floating bridge and has to balance these requirements with the needs of the many different users who use the bridge. The need for the raised plates is to provide coverage over the open expansion joint. The plates are also designed to support the load of our large under-bridge inspection trucks. The engineering team has evaluated the joints to ensure that they are compliant with ADA and contract standards.

When the West Approach Bridge North opens to bicycles/pedestrians this fall and completes the path into/out of Seattle, riders will see similar, but lower profile expansion joint covers on the 1.2-mile stretch from the floating bridge to Montlake.

I just find it hard to believe that this major project can’t find some way to minimize this hazard in the months before it opens. If the rise of the plate edges were just barely more gradual, there would be no problem at all. I bet they could even attach a simple fix to the existing plates (a cover that has a more gradual profile, for example). For a $4.56 billion project, WSDOT should be aiming higher than the absolute bare minimum allowed by ADA code.

I want to make sure that when this trail opens, all of the talk is about all the amazing new walking and biking connections it enables. I don’t want the story to be about people crashing on our brand new bridge. This would be such a silly and avoidable reason for someone to be injured (or worse).

This entry was posted in news and tagged 520 trail, sr 520, wsdot. Bookmark the permalink.