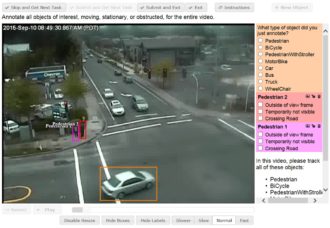 Screenshot shows what the user-submission screen looks like. You draw boxes around each “object” and track their movements through the scene. This will help the system learn to do it on its own.

The City of Bellevue, the UW and Microsoft just launched a fascinating machine-learning effort to analyze traffic danger and identify collision locations and conditions before they happen.

But they need your help marking-up segments of video to identify people walking, biking and driving so the Video Analytics Towards Vision Zero program can better determine the conditions where close calls occur.

And that’s the potential brilliance of this project. Rather than simply chasing collision locations after someone has already been injured or killed, this analysis can look at roadway conditions that lead to lots of near misses and use that data to predict the spots where the next injury or death is most likely to occur.

The system uses footage from existing traffic cameras to track “objects,” the word the system uses to refer to people biking, walking or driving. It also tracks each mode’s common paths and gets an accurate count of trips by each. This data alone is potentially valuable, especially if the automated system makes it more affordable to gather more accurate biking and walking counts than the limited data that exists today: 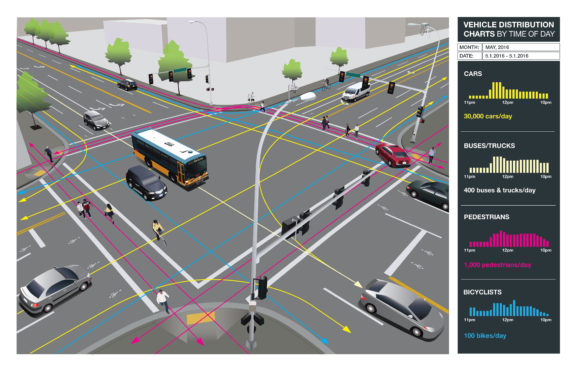 The system can then spatially track objects as they move through the frame and record incidents where objects come in close contact to each other or have to take evasive action to avoid collisions: 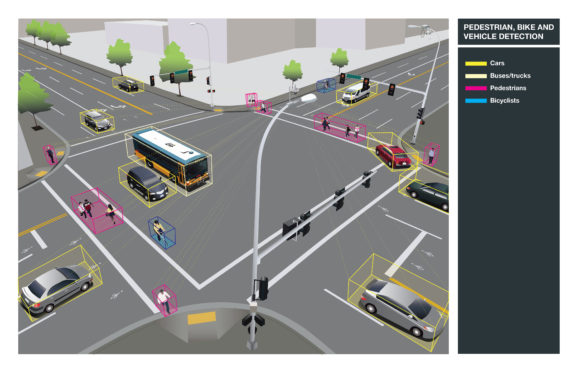 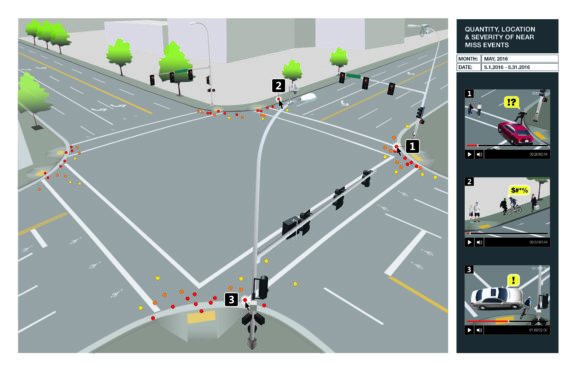 The system can then compile these incidents to look for patterns, as shown in this sample heat map: 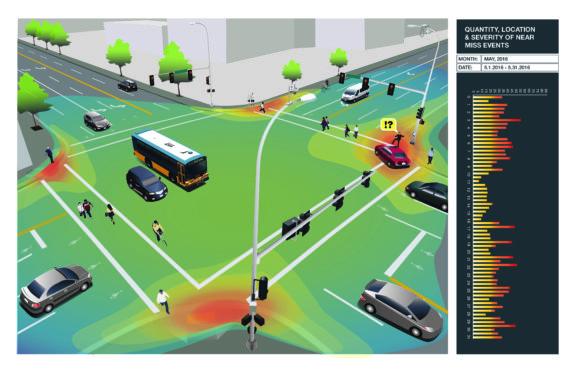 Of course, this data will be solely academic if cities don’t have the political will to act on it. We already know, for example, that a wide curb radius encourages people driving to take turns too quickly and too close to people walking. Each of the red areas above could be addressed by extending the curbs closer to the center of the intersection or by installing a protected intersection. A more acute curb radius would require people driving cars to slow down and people driving large trucks or buses to swing left before turning right, but it would have a big positive impact on safety and would create more sidewalk space at each corner.

But will Bellevue (or any other city that uses this technology) have the guts to redesign their intersections to put the safety of people walking above the desire for quick turns? Hopefully this data can help convince leaders, but well see.

If you want to help, just go to the project website. It does take some time to get through a short clip, so this would be a great way to kill time at work or the dentist’s office or something like that :-)

Be sure to watch the how-to video first, because it’s not intuitive on its own:

From the City of Bellevue press release:

In a collaboration with organizations across North America, the City of Bellevue, the University of Washington and Microsoft are asking for the public’s help in a cutting-edge effort to help prevent deaths and serious injuries from traffic crashes.

Called “Video Analytics Towards Vision Zero,” the project will tap new technologies to analyze traffic camera video footage available in many cities, and use near-miss collisions to predict where future crashes are likely to occur. Traffic engineers could then take corrective action to prevent them.

Project organizers are encouraging as many people as possible to help by watching traffic camera video and using tracking tools to identify objects and movements. The crowd-sourcing effort is critical to the project’s success. The videos and tools are now available on the project web page. Detailed information about the project is available in an ITE Journal article.

Mayor John Stokes noted that Bellevue is committed to using technology to improve city services. “In this case, we have the opportunity to work with great partners to make the biggest difference of all — saving lives,” he said. “Everyone who participates in the Video Analytics project can make a small contribution that could add up to a big impact in keeping our walkers, bicyclists and drivers safe.”

The potential of the project for saving lives is significant. In 2016, road crashes resulted in approximately 40,000 deaths and 4.6 million injuries in the United States alone. For young people under age 19, these collisions were the leading cause of death.

“Computer vision algorithms applied to video feeds from traffic cameras have a huge potential of improving traffic flow and reducing traffic crashes and fatalities,” said Microsoft Research Distinguished Scientist Victor Bahl. “We are working diligently on this because we truly believe the societal impact will be significant.”

Likewise, in Bellevue last year there were 433 traffic incidents involving injuries, 39 bicycle crashes and 47 pedestrian incidents, including one person who was killed in a downtown crosswalk.

“Video analytics turns the traditional model of reacting to crashes on its head. It will give us tools to predict where incidents are going to occur so we can take counter-measures in a proactive way,” said Dave Berg, Bellevue Transportation director. “It could be a game-changer, not just for us, but for cities around the world.”

As part of the project, crowd-sourced inputs will be used for “machine learning” — teaching computers how to tell the difference between cars, buses, trucks, motorcycles, bicycles, and pedestrians. Ultimately, instead of a person watching a few hours of video, computer algorithms will analyze millions of hours of footage live, in real time.

The technology uses near-miss collisions as zero-cost learning opportunities to improve road safety. It holds the potential to dramatically reduce the number of crashes by predicting where, when, and how they are likely to occur.

The Video Analytics project fits with the City Council’s vision to make Bellevue a Smart City, with a goal to achieve predictive, interoperable and adaptive services and operations. Vision Zero is an international initiative that aims to end all traffic deaths and serious injuries on streets by 2030.