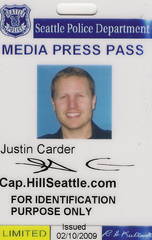 Capitol Hill Seattle’s Justin Carder (or as his close friends call him, “@jseattle“) is likely the hardest-working journalist this side of West Seattle. His dedication to the grind of very-local news has been a remarkable thing to witness, and he has been a major inspiration and mentor for my work.

It’s hard to imagine Seattle news without Capitol Hill Seattle, which has expanded its scope beyond just its namesake neighborhood over the past 11 years. But I guess we’re all about to find out.

CHS documents life on the ground in Seattle to a degree few (if any) other news sources in the city can reach. It has been a strong response to these grim days of newsroom layoffs and “content aggregation.” And Carder has managed it all as a truly independent news site, funded by a combination of local advertisers, reader support and his own long hours of work.

Carder and other CHS writers and photographers put many miles on the soles of their shoes to document and share what is happening in and near our city’s densest and every-changing central neighborhoods. The depth of information they have provided us every day has been an incredible public service.

CHS is a news source where news about one small business expanding or the creation of a tiny pavement park is as big a story as a new city law or political scandal. It’s an online space where neighbors can have tough conversations about issues like policing, development or homelessness that are fueled by quality reporting. It is a much healthier place to start such conversations than what you’ll often find at neighborhood social media networks like Nextdoor or other online spaces not grounded in journalism.

I worked for Carder 2010 through 2012 as Editor of Central District News (RIP), a sister site to CHS. I have also done web design and hosting work for CHS (though 95 percent of the time CHS has gone down, it was Justin’s fault. The guy likes to click buttons he shouldn’t click.)

Seattle Bike Blog may not be here if it weren’t for all the lessons I have learned from Carder, from navigating the Seattle Police Department and other public records to building a business based on local advertiser relationships to establishing a work ethic needed to provide daily news that is both informative and keep people coming back day after day.

For as much time as Carder has spent listening to the police scanner the past 11 years, it’s amazing he has lasted this long (I took over his scanner for one weekend, and I couldn’t handle the stress).

I wish him the best in whatever he takes on next (I heard his youth soccer coaching career is off to a promising start). I selfishly want him to come back to CHS ASAP because I love reading it. But even if he never posts there again, his work has had a huge and lasting impact on the city.

So cheers to Justin Carder. You’ve earned the time to figure out what you want to do next. CHS has been a wonderful gift to the city. Now stop listening to that damn scanner and go hiking with your kids.

This entry was posted in news and tagged capitol hill seattle, justin carder. Bookmark the permalink.