Why everyone should try Pronto before it shuts down Friday 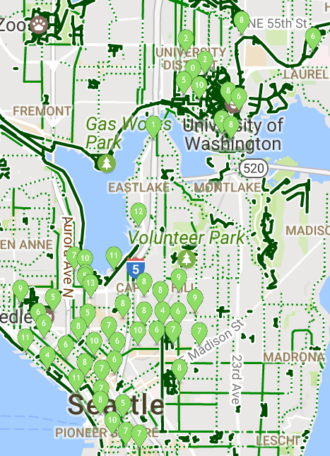 Soon, these stations will become part of Seattle legend… the bike share that once was.

If you have not yet tried Pronto Cycle Share, make it your civic duty to give it a spin before it shuts down for good Friday.

Yes, I’m talking to you, haters.

I’m also talking to all of you who ride your own bikes and never saw the need or use in trying Pronto. And to all of you who don’t work or live anywhere close to the service area. Go out of your way to try it in the next couple days.

Because after Friday, Pronto will become part of Seattle lore: The public bike system that once was.

So take the light rail to UW Station and grab a Pronto to get coffee on the Ave. Or take a bus or train to International District Station and Pronto up to Pike Place Market for lunch. Find an excuse. It will only cost you $8.

Because while Pronto is going away, the debate over bike share in Seattle is not ending any time soon. And if you want to have first-hand experience to know what you’re talking about, this is your last chance.

Bike share is simply one of those things that doesn’t totally make sense until you do it yourself. There’s this almost magical feeling that happens when you dock the bike at your destination and hear it beep. You get to just walk away. The bike isn’t your responsibility anymore. You don’t even need to bike back later if you don’t want to. You can take a bus instead. Or get a ride from a friend. Whatever.

In a word, it’s freedom.

I have written exhaustively about Pronto and how we got where we are. I won’t rehash that all here. Instead, go experience it for what it is, warts and all. It’s the start of something that could have been great, a bold idea that really happened, but never reached its potential. Get some fun in before the depressing work of dismantling it begins, as explained by the Seattle Times:

Its last day of operation will be Friday. After a weekend in purgatory, work crews will begin taking down and packing up the program’s 54 stations and 500 bikes on Monday. That process will last about two weeks, the Seattle Department of Transportation (SDOT) said.

The equipment will be put into storage as SDOT looks for other cities that may want to buy it. Pronto stations that were on the street (as opposed to a sidewalk) will be replaced by whatever parking type is on the rest of the block while SDOT considers future uses.