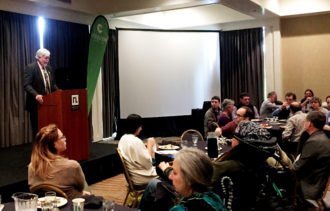 Be sure to check out our other notes from the 2017 WA Bike Summit.

State Transportation Secretary Roger Millar kicked off the Monday keynote with some solid jokes about job security, a reference to the sudden, politically-motivated firing his predecessor Lynn Peterson one year ago.

Millar, who walks to work every day, talked about the state’s responsibility to see beyond just personal cars.

And he emphasized that “active transportation isn’t just for urban centers.” People in communities of all sizes across the state are either choosing to biking and walk or can’t afford another option.

He also briefly talked about the now-infamous butane truck crash on I-5 and the terrible traffic it created.

“Everybody was stuck, except for those of us who walked and biked.”

WSDOT’s staff is about to experience a remarkable amount of turnover in coming years, which is both a huge challenge and big opportunity for increasing diversity throughout the ranks.

“Eighty percent of our maintenance supervisor staff is eligible for retirement,” he said. ” We have an opportunity in a very short period of time to literally change the face of the department.”

He said diversifying staff is one key way to improve how projects impact communities. Another is to change the way projects are developed in the first place.

“We want our projects and programs to be sensistive to the cultures of the communities we serve,” he said. “Before we go out to solve a problem, we want to go out to communities and ask, ‘What is the problem we are trying to solve?'”