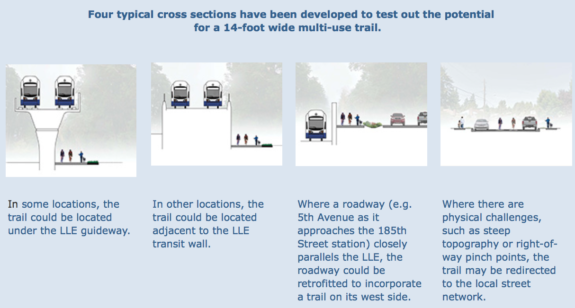 From the project webpage. 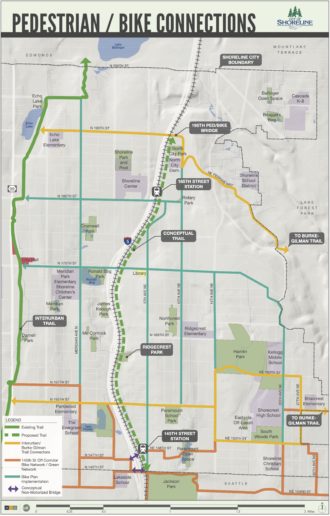 The City of Shoreline has a great idea for taking advantage of Sound Transit construction to also revolutionize bike access in their city: A “Trail Along the Rail.”

Much like the Interurban Trail is a premiere asset for the city’s SR 99 corridor — providing vital access to businesses, homes, parks and schools — the new Link-adjacent trail could do the same for the city’s I-5 corridor.

And by coordinating construction of the trail with light rail construction, there will never be an easier opportunity to make this connection.

The early concept shows the trail connecting from the border with Seattle at Jackson Park all the way to N 195th Street, which has an I-5 crossing. The trail would provide access to planned stations at N 145th and N 185th Street Stations.

I-5 will remain a major impediment to east-west travel, but the city also has plans for improving access to the relatively few existing crossings.

The project is still only an idea, so it’s going to take a big push from neighbors to make this a priority. Since light rail construction is set to begin in 2018, this trail idea needs to get moving if it is going to be ready to break ground with the rail line.

If you want to learn more or provide feedback, Shoreline is hosting a public meeting 6–8 p.m. March 15 at Shoreline City Hall. More details:

Development of light rail through the City of Shoreline presents a unique and rare opportunity. The City is looking at the possibility of building a multi-use trail running roughly parallel to the light rail alignment through Shoreline. Located on the east side of I-5, the trail would run from N 145th Street to NE 195th Street. It would enhance pedestrian and bicycle access to the planned 145th Street and 185th Street light rail stations, as well as connect to the NE 195th Street pedestrian bridge over I-5. In addition, the trail could connect to local streets, parks, open spaces, and schools within the neighborhoods adjacent to the light rail alignment.

Similar to the Interurban Trail, the “Trail Along the Rail” could serve as Shoreline’s segment of a potential regional multi-use trail that could ultimately connect cities along the Lynnwood Link Extension (LLE) light rail alignment from Seattle all the way to Everett.

As the first step to testing out this vision, the City is conducting a feasibility study of a trail along the planned light rail alignment. We need your feedback to develop the preferred trail alignment plan. Please come to the public meeting at Shoreline City Hall on Wednesday, March 15, from 6:00 to 8:00 p.m. and provide your input.

This entry was posted in news and tagged i-5, shoreline, trail along the rail. Bookmark the permalink.