One year after the Greenwood explosion, G&O Family Cyclery opens its new home 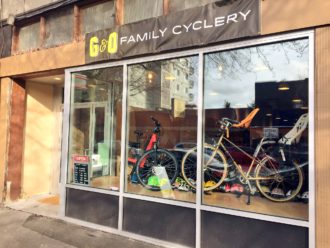 It’s been a very long and hard year for many Greenwood businesses damaged or destroyed by the March 9, 2016, natural gas explosion.

Many are still struggling to hang on while insurance companies and Puget Sound Energy delay and haggle over who needs to pay out for the immense damage that has so far mostly fallen on the businesses themselves. Neptune Coffee may reportedly throw in the towel.

That’s why it was such a wonderful experience to visit the new location for G&O Family Cyclery, which opened for business Wednesday nearly one year after the explosion destroyed their original home just a block and a half south of their new shop. Owners Davey Oil and Tyler Gillies were clearly glowing, finally able to get back to doing what they love: Getting people on bikes built to handle whatever family life throws at them.

G&O will host a grand reopening party at the new shop (8558 Greenwood Ave N) 7–10 p.m. March 9, the one-year anniversary of the explosion (details below). 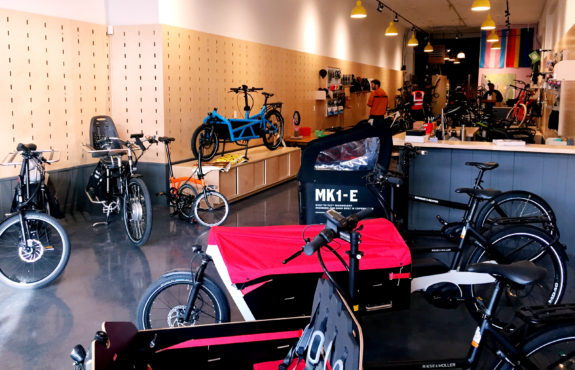 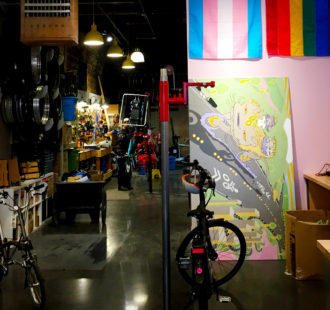 Staff are still working on the space, building shelves, getting more goods on display and working on signage and such. But it’s open for business, and the maintenance stands are already getting a workout.

The new space is much larger the old one, and much, much larger than the tiny temporary summer space. The shop is built to fit the upward trend their business was following before the explosion turned everything upside down.

G&O’s bet that Seattle was ready for a bike shop focused almost entirely on cargo bikes for families paid off big time. Within months of opening, they were already bursting and the seams of the old shop and had plans to expand. 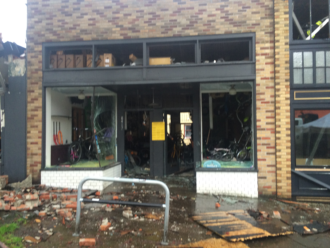 Photo of the old shop shortly after the explosion, from Davey Oil. The building was structurally damaged and has since been torn down.

So the explosion has put them a year behind, but the new shop is set to be even better than the old one.

Though they aren’t out of the woods yet, getting the doors open and putting their staff back to work was a giant step for the company. If you have been in the market for a cargo bike, now might be a good time.

Now — full disclosure — G&O is not only an advertiser, but Oil is a close friend (he ministered my wedding!). The shop inspires me, and I even helped organize a fundraiser for the shop to help them open a small temporary location for the summer. I’m just so happy to see them open in bigger space, and look forward to watching it grow.

More details on the reopening party from G&O:

March Ninth is the anniversary of the Greenwood Blast.

Let that sink in. It has been an entire year!

Many ask, how much longer until the impacted neighborhood is whole and healed? Others wanna know, what is the gas company doing to make things right?

We at G&O Family Cyclery only have one question. WHO IS GONNA PARTY WITH US?

Seriously, you people have been amazing. We are all still here, still managing to survive. We think that deserves a party.

1 Response to One year after the Greenwood explosion, G&O Family Cyclery opens its new home