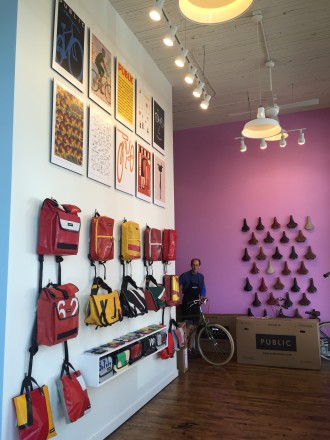 Photo from April 2015, just before the shop opened.

When Public Bikes opened at Summit and Pine in April 2015, we noted that the shop was “well-positioned to take advantage of Capitol Hill’s bike shop desert.” Velo Bike Shop had recently moved to the Denny Triangle area after decades on the Hill, and one of the city’s densest and bikiest neighborhoods was left without a bike shop in any of its main business districts.

But Public was a little different from a bike shop like Velo. For one, it only sold its own brand of bike (though it had a wide variety of stylish accessories). And it’s maintenance shop was largely focused on servicing Public brand bikes, though they did limited service on other brands of bikes.

Public bikes are largely sold directly to customers online, and the Seattle shop was among the company’s first attempts to open brick-and-mortar shops outside their Bay Area home.

Since Public opened, a new model of bike shop has broken out on Capitol Hill: The bike shop cafe. And that concept only shows signs of expanding.

Métier at 11th and Union is a high-end shop with an exercise space and a full bar and cafe.

Peloton (located just outside the Hill at 12th and Jefferson) is a small and scrappy bike shop started by a crew with deep roots in the bike polo scene. And they make some seriously killer breakfast sandwiches (they even got a shout out from Seattle Met as one of the “Best New Restaurants of 2016”).

And high-end, London-based bike product maker Rapha is opening a “clubhouse” at Pine and Melrose in March. The clubhouse, which will open just a few blocks from Public’s store, “offers the full selection of Rapha products – including rain jackets – and serves the finest food and espresso,” according to the Rapha Seattle webpage.

There are still a few places in the area you can go to get a bike fixed without the roar of an espresso machine milk steamer. People looking to grab an affordable used bike in the area can swing down to the storied 20/20 Cycle at 20th and Union. And the good folks at 20/20 recently opened Electric Lady, a new shop at 23rd and Union focused on electric, cargo and touring bikes.

Branford Bike on 10th Ave continues to serve the north end of Capitol Hill. REI’s nearby flagship store certainly does some heavy lifting in serving the Hill. And there are many shops downtown, including Velo, that aren’t so far.

So even though Public is closing, the bike shop landscape on Capitol Hill is stronger than it was when Public opened just under two years ago. But businesses getting into the neighborhood’s increasingly-expensive retail rents there are finding creative ways to augment the bike part of the business model.

More details on the closure from Public: