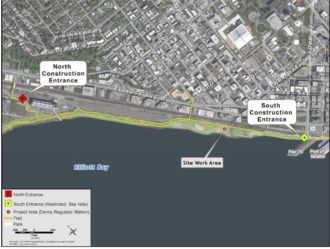 King County is beginning work this week on a delayed waterwater regulator project in Myrtle Edwards Park that could disrupt the Elliott Bay Trail.

The project worksite entrance is at the south entrance to the trail near the Sculpture Garden, an area that can get congested with people biking and walking.

The County says flaggers will control traffic during “temporary periods of trail narrowing.”

A 2014 detour at this spot caused a small headache as crews installing a sculpture tried to get people biking to walk their bikes on the shared biking and walking path adjacent to the closed bike trail. But the delays were nowhere near as frustrating as the annual Hempfest closure in the park.

More details from the King County Department of Natural Resources and Parks (PDF):

Starting this week, the King County Wastewater Treatment Division will begin construction work at the Denny Way Regulator Station in Myrtle Edwards Park on Elliott Bay. The project, previously expected to start in September 2016, was delayed until January 2017.

Construction access to the site will be mainly from the south entrance of the Myrtle Edwards Park. Only concrete delivery vehicles will access the work site from the north entrance of the park. The work will take approximately one year to complete. King County will notify the community if the schedule changes.