Section of Elliott Bay Trail will close for sculpture installation 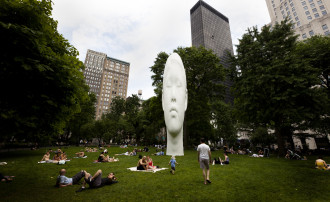 A short section of the Elliott Bay bike trail through Myrtle Edward Park will be closed until the end of May so Seattle Art Museum crews can install a large sculpture. The closure begins Monday.

Jaume Plensa’s “Echo” was originally installed in New York City’s Madison Square Park (see video below). The work has been donated to SAM.

A notice from SDOT says that people on bikes will need to detour onto the walking path, which can get very crowded and is not as wide as the bike trail. The notice also suggests that people should walk their bikes:

On Monday, March 31, the Seattle Art Museum (SAM) will begin installation of “Echo,” a 46-foot sculpture by Spanish artist Jaume Plensa. This work will require a two month closure of a small section of the bike trail in the Olympic Sculpture Park.  SAM is providing an alternative route that will require bikers to walk their bicycles for a short distance on the pedestrian path along the seawall. The pedestrian sidewalk will remain open. The installation is estimated to be completed at the end of May 2014.

Echo was donated to the Seattle Art Museum from the collection of Barney A. Ebsworth. It was originally commissioned by the Madison Park Association in New York and installed at Madison Square Park in 2011 to great acclaim. It is made from resin, steel and coated in marble dust. Plensa is an internationally celebrated sculptor working in the public space, with over 30 projects spanning the globe in such cities as Chicago, Dubai, London, Liverpool, Tokyo, Toronto and New York.

Here’s a video from the installation in New York: