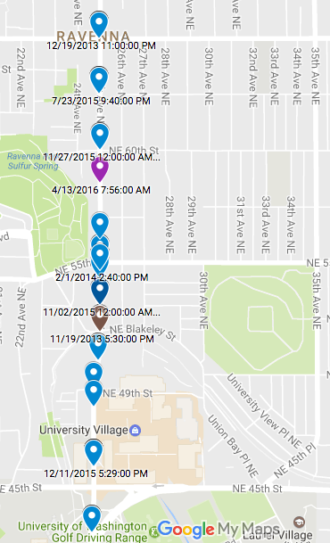 Injury collisions on 25th Ave NE (2013-2015). 56 people were hospitalized due to collisions on this stretch in those three years. Explore the map by Andres Salomon based on SDOT data.

25th Ave NE is a wide, unfriendly street separating the U Village shopping center from bus stops and its neighbors in the Ravenna/U District area.

Nearby residents have among the lowest car ownership rates in the whole city, yet 25th Ave NE has an outdated, cars-first design that makes it difficult and even dangerous for people to access the many destinations along and across the street.

With a $3.6 million budget, Seattle is working to finalize design work for a major repaving project later this year on 25th Ave NE from NE 65th Street to Montlake Blvd. But the plans do not currently include safety changes to the street, a remarkable omission that flies in the face of the city’s Vision Zero goals.

Andres Salomon made a strong case for safety improvements on 25th Ave NE in a December post for The Urbanist (emphasis mine):

According to the City’s website, the repaving project of 25th Ave NE will cost $3.6 million dollars and span 1.1 miles of road. The only safety improvement being made is the addition of a pedestrian crossing at NE 49th St (in front of a University Village entrance). This stretch of roadway is four to five lanes wide, and sees numerous speed-related collisions and injuries each year.

In just the past three years alone, there were 140 reported collisions on the part of 25th Ave NE that’s being repaved. Those crashes sent 56 people to the hospital. Seven of those people who were injured were walking, and another seven were biking. The remaining 42 injured people were in cars. The most serious of those injuries involved crashes with only a single vehicle; in other words, people were driving way too fast and crashed. Click here to view a map with collision data.

Looking at the traffic volumes for the section of 25th Ave NE being repaved, it’s clear that safety improvements could easily be made through a standard road diet. Road diets generally work with traffic volumes of less than 25,000 vehicles per day, and 25th Ave NE has less than 12,000 vehicles per day north of NE 49th St. For comparison, NE 75th St has around 22,000 vehicles per day and was successfully transitioned to three lanes with collisions and speeding drastically reduced, while average speed actually increased. As a result, the roadway became more efficient for drivers, while also becoming safer for everyone.

The good news is that space is not exactly a premium on this street. It is wide and has too many lanes for the relatively low traffic volume it carries. Planners have many options for making safety improvements.

A safe streets redesign would also create much safer crosswalks, helping the growing number of people on foot, bike or bus get around the area. Safe crossing are often far away from each other, forcing people to choose between taking a long detour or making a run for it across the five-lane roadway.

The project does include a new signalized crossing at NE 49th Street, but collision history shows a history of problems all along the street, Salomon found. The problem is core to the road’s outdated design, which is designed like a highway to prioritize speeding at the expense of safety and walk/bike/transit access.

The majority of collisions are between two people driving, so the biggest beneficiaries of safety improvements would be people in cars. Of the 56 people hospitalized in collision along this stretch of 25th Ave NE in just the past three years, 42 were in cars. That’s an astounding figure that makes it all the more frustrating that safety improvements were not a central part of the work plan from the start.

Seattle is never going to reach Vision Zero if the city spends millions to repave streets and put them back in the same way that is causing collisions today. Paving investments are the city’s easiest opportunities to make safety upgrades, since redesigning a street is essentially free if you’re already tearing it up anyway.

This entry was posted in news and tagged 2017 paving, 25th ave ne, ravenna, u district, u village. Bookmark the permalink.