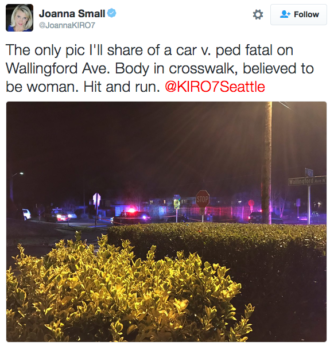 The woman allegedly responsible was driving north on Wallingford Ave N shortly before 7 p.m. when she struck a woman walking across N 82nd Street. She drove from the scene immediately after the fatal collision, but returned to turn herself in “a short time later,” according to Seattle Police.

She was booked into King County Jail on investigation of Vehicular Homicide.

UPDATE: Treza Hafzalla has been charged with Vehicular Homicide and Felony Hit and Run. Police found Yelli’s grocery cart stuck in the grill of Hafzalla’s GMC Jimmy, according to the charging document. Hafzalla called her boyfriend after parking her SUV a mile from the scene, but instead of taking her home, he drove her back to the scene where she was arrested. Hafzalla is suspected of DUI, though blood tests were still pending as of the time charges were filed.

The Medical Examiner and SPD’s traffic collision team were both on the scene. Investigations are ongoing, according to police. KIRO 7’s Joanna Small was on the scene and reported via Twitter that the victim’s body was in the crosswalk.

This hit and run death appears to be the first traffic death of 2017 in Seattle. The city has averaged about 18 traffic deaths per year since 2011, though traffic deaths rose sharply in 2016 nationwide. Seattle’s streets are among the safest for a major U.S. city, but that is not good enough. Seattle’s Vision Zero program sets a goal of zero deaths and serious injuries by 2030 with a focus on people walking and biking, who are disproportionately impacted.

More details on the fatal collision from SPD:

An adult female has been taken into custody and detectives are investigating following a fatal hit and run vehicle/pedestrian collision Sunday evening.

On Sunday, January 1st, just before 7:00 pm, a vehicle was traveling northbound on Wallingford Avenue North.  An adult woman pedestrian was struck by the vehicle as she crossed the street at N. 82nd Street.  The driver of the vehicle left the scene, and witnesses called 911 after seeing the victim in the street.  Seattle Fire pronounced the victim deceased at the scene.  A short time later a woman came back to the scene and informed officers she had been driving the vehicle that struck the pedestrian.  The woman was taken into custody. She was evaluated for  signs of impairment by a Drug Recognition Expert (DRE) officer, which is standard protocol.  Traffic Collision Investigation Squad (TCIS) detectives responded to the scene and began their preliminary investigation at the scene.

The driver was booked into the King County Jail for Investigation of Vehicular Homicide.  This remains an active and ongoing investigation.

This entry was posted in news and tagged deaths, green lake. Bookmark the permalink.

22 Responses to Woman walking in Green Lake crosswalk killed in hit and run, suspect returned and was arrested – UPDATED