City has chance to improve biking, walking and transit in Fremont’s ‘Center of the Universe’ 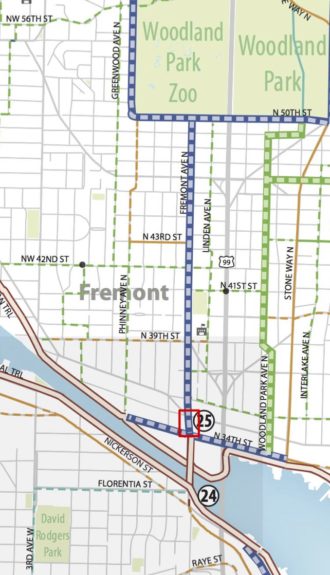 All bike routes lead to the Center of the Universe and this block of Fremont Ave. Image from the city’s Bike Master Plan, calling for protected bike lanes. Red square is the study area.

Fremont’s Center of the Universe could get an amazing walking, biking and transit makeover next year, but only if the city chooses to be bold.

SDOT is in the early design phase for bus stop improvements on Fremont Ave between N 34th and 36th Streets directly north of the Fremont Bridge. This block is at the epicenter of the neighborhood’s street grid and serves as one of the trickiest bike route gaps in the Interurban regional bike network stretching as far north as Everett.

More and more people are biking, walking and taking buses on routes that all converge at this point, but the street design is outdated and has failed to keep up with the people it serves. Sidewalks are overcrowded, especially during peak hours when people are waiting for the bus. Dozens of people walking and biking have been injured in the past ten years in just this one block.

SDOT is planning some bus stop improvements for the block to address the sidewalk crowding issue. The project could also create safer crosswalks and protected bike lanes, but only if city leaders decide to make the safety and comfort of people biking and walking a priority.

As the project is today in this early stage, biking and walking improvements will be left out entirely. People need to get organized to push for bold action, or the city is going to throw away this great opportunity.

Project planners presented their work to the Seattle Bicycle Advisory Board last week (PDF), and it’s clear that bike lane and crosswalk improvements won’t be possible without reducing the number of general purpose lanes. But the project’s “assumptions” list includes at least two lanes in each direction.

So biking and walking safety is negotiable, but having multiple lanes for cars is not. This is not acceptable. Safety must actually be SDOT’s top priority, as the department so often claims it is.

Here’s one way the street could look simply by removing one southbound lane and having buses stop in-lane (a short bus lane on 36th/Fremont Pl N with a queue jump at Fremont Ave could get buses ahead of bridge backups):

Imagine this facing north from 34th. The sidewalk stretches are bus islands. I mocked up the existing conditions on StreetMix so you can make your own plans.

First, let’s show how we got here and where the conflicts and complications arise. The existing trees on the west side of the street are mature, and pretty much everyone wants them to stay. So the area the city has to work with starts at the western curb. Here’s what it looks like today facing north from N 34th St, via Google Street View: 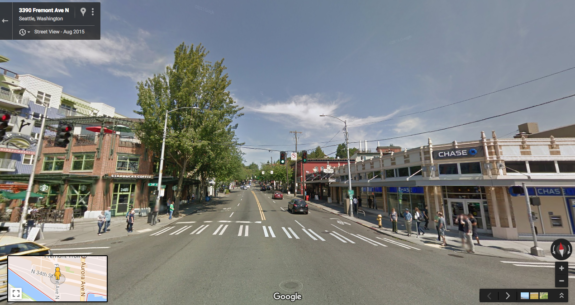 If two general purpose lanes are maintained in each direction, there is no room for protected bike lanes that meet modern standards. Planners looked at various models for bike lanes that mix with bus stops, including raised bike lanes that double as bus loading areas. Seattle does not have any examples of these kinds of lanes yet, but here’s an example from Canada: 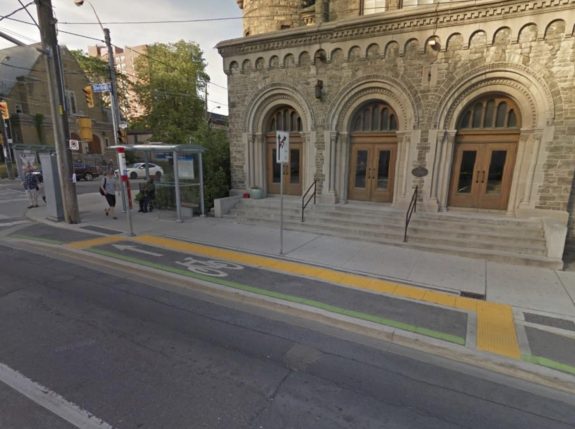 Image from an SDOT presentation to the Bike Board. 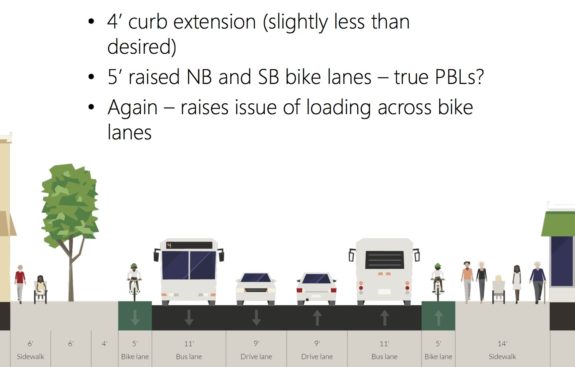 The “bus lanes” are not actually bus lanes, just general purpose lanes that buses would use.

The safety and comfort of this kind of bike lane is questionable, since it would require widespread education. It would only work if people biking are patient and know to stop for bus users. Everyone waiting for the bus would also need to know to keep the bike lane clear when buses are not present. On top of this, it’s not clear if such a design would fit within U.S. traffic design standards. While I’m all for challenging U.S. standards when they are slow to keep up with best practices in other countries, I’m not sure this design rises to that level.

But because of the project’s assumption that there must be two lanes in each direction, this is the best they could come up with. And since it’s not particularly promising, their current plan is to scrap the idea and do nothing more than bump out the west sidewalk five feet and repaint the sharrows:

This is not nearly good enough. In fact, the planned sidewalk extension may even make it harder to build quality protected bike lanes with real bus islands at some later date.

Seattle, stop beating around the bush. Let’s do this right the first time. Prioritize walking, biking and transit in Fremont.

People driving have many other options for crossing the Ship Canal, including the Aurora and Ballard Bridges, but people biking and walking rely heavily on the Fremont Bridge. Even with its skinny sidewalks, the Fremont Bridge is by far the most comfortable and accessible way to walk and bike cross the canal west of the University Bridge.

A more comfortable Center of the Universe would be a boon for businesses in Fremont. The vast majority of people shopping in downtown Fremont already get there by biking, walking and taking the bus. A 2014 study (PDF) found only 10 percent of customers drove alone to Fremont, while another 12 percent carpooled. 10 percent bused, nine percent biked and an astounding 57 percent walked.

Fremont Ave is begging for a modern remake to catch up with the ways people are already getting there. There will never be a better time to make this change than right now. 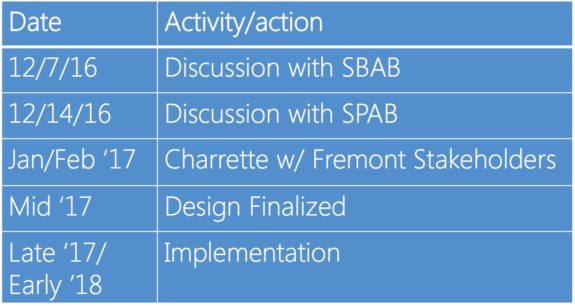 33 Responses to City has chance to improve biking, walking and transit in Fremont’s ‘Center of the Universe’