Here’s an item that got swallowed up in the wake of election news: Seattle announced $6.5 million in neighborhood-led transportation projects across the city. The 12 projects were the winners of SDOT’s Neighborhood Street Fund (“NSF”), and are the result of tireless work by neighborhood advocates.

Seriously, it takes a lot of volunteer patience and persistence to get an idea through to approval and construction. So congratulations to everyone who championed these ideas.

Each project is scheduled for design in 2017 and installation in 2018.

The NSF was first funded by the Bridging the Gap levy, and now is funded by Move Seattle. It’s not to be confused with the Neighborhood Parks and Street Fund, which is an entirely different program with neighborhood-generated projects that typically have smaller budgets.

Here’s a look at the 2016 NSF winners (click the titles for project PDFs with more details and images): 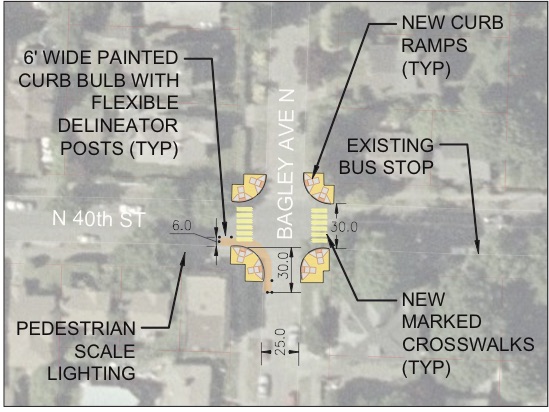 Accessible ramps and safer crosswalks to help people get across the busy N 40th Street, which divides Wallingford. 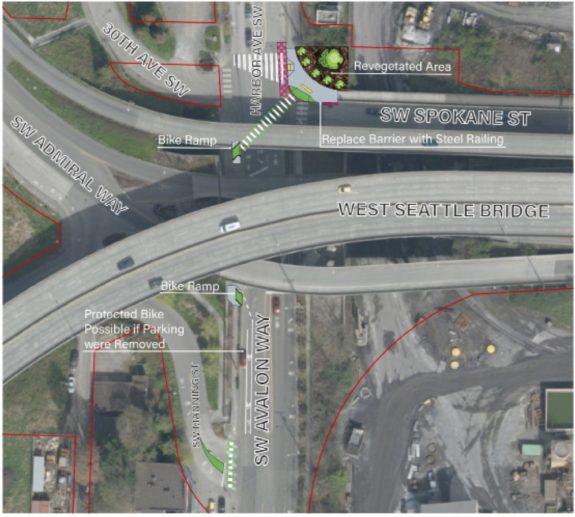 This project aims to help people get between SW Avalon Way and the Alki Trail. 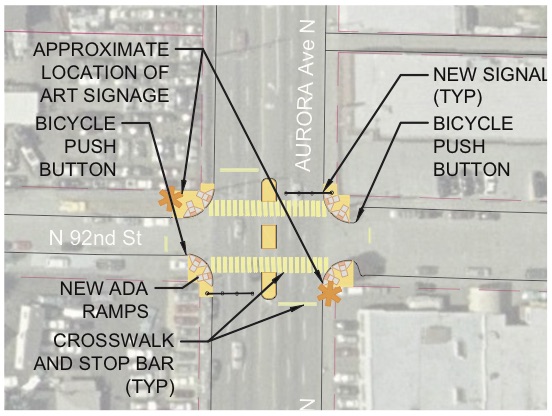 This project is actually a combination of Safe Routes to School crossings, revamped crosswalks and Aurora-Licton urban village identity and art projects. Crosswalks will be improved at N 85th, 90th, 92nd, 95th, 100th, 102nd and 105th Streets. The crossings will pair well with city plans for a Crown Hill neighborhood greenway on either N 90th or 92nd Streets, which will need to cross Aurora. 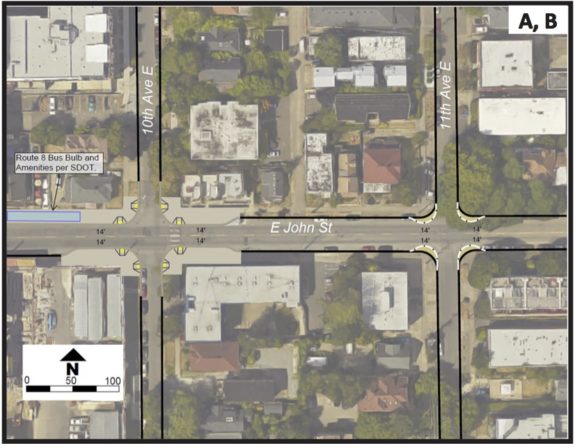 Finally, a project to improve crossings all along the John/Thomas corridor between Broadway and 23rd Ave. Crossing this street is unnecessarily dangerous and stressful, and the problem is particularly egregious in such a dense area filled with people trying to cross this damn street. The opening of Capitol Hill Station has put a major sense of urgency on the crossing at 10th Ave E, and I hope the city (and Metro, which is funding bus stop improvements) do everything they can to expedite this part of the plan.

To make a personal plug, I’m excited the city is improving the connection between 20th Ave and Miller Park, since this is near my house and I use this crossing daily. The drawings don’t show it, but there is a trail through Miller Park that starts a half block west of 20th. This trail connects directly from Thomas to Miller Community Center, the spray fountain and the under-renovation Meany Middle School, but the start of the trail dead ends mid-block on busy Thomas St. This project at 20th/Thomas is a great opportunity to make a short trail/protected bike lane connection at least to 20th if not all the way to 21st. It would displace three or four on-street parking spaces, but would activate this great existing park trail. Definitely a worthy trade-off. NE 70 St and I-5 Walking and Biking Improvements Adding a new I-5 crossing is very difficult and expensive, so we gotta take advantage of the ones we have as best we can, making them safe and comfortable for all users. NE 70th St is low-hanging fruit. Better delineate the bike lane to calm traffic on the curve (people often drive over the paint-only bike lane today when they cut the corner), and you’ve got a calmer overpass, safer crosswalks and less stressful bike lanes. This project will go further, making accessibility improvements and adding an all-way stop at 8th Ave NE to help everyone get where they’re going. The city should audit and improve all of its existing I-5 overpasses this way. Another fantastic project, fixing the mess in front of MacPherson’s and connecting many south Beacon Hill homes to Mercer Middle School, the VA, Jefferson Park and beyond. This intersection is the nexus of many popular bike routes, and I hope the project team uses this as an opportunity to fully connect them to each other.  S Columbian Way has bike lanes that start in Columbia City and disappear just a couple dozen feet before this intersection. S Oregon St connects to the neighborhood greenway between Georgetown and the I-90 Trail, 16th Ave S is a popular route to Jefferson Park, and 15th Ave S leads to the start of the Chief Sealth Trail just a few blocks south of this intersection. So while the primary function of this project is to fix the awful mess for people walking, this project could also complete a lot of bike route connections all in one go. This project proposal was much more ambitious, but sadly much of it was considered unfeasible. So the result is a bit lackluster. Neighbors were hoping to create a “main street” feel for Jackson in the 23rd-to-MLK area by making ambitious walkability improvements. They wanted raised intersections at both 23rd and MLK, but “raised crosswalks were not feasible to the presence of trolley bus wires on S Jackson St,” according to engineers. I had never heard that trolley wires and raised intersections were incompatible. If true in all cases, that’s quite a bummer. Surely there must be a solution. 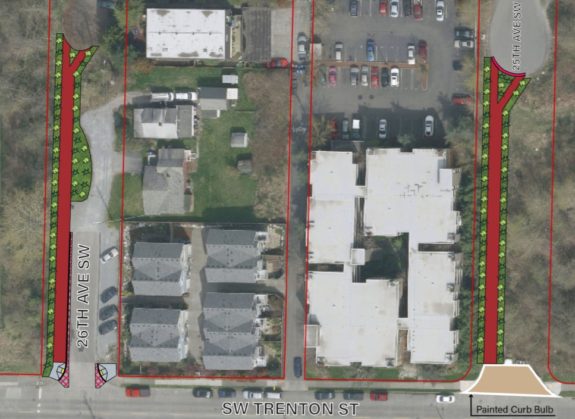 These two pathways connecting to Chief Sealth High School already exist, but they’re rough, overgrown, unlit and sometimes scary for students and neighbors to use. This project will pave the paths and provide quality lighting and visibility. Freeway Park is one of Seattle’s strangest public spaces. But one of its biggest problems is that it’s not clear how to get there. The entrances are often hidden or subtle. It’s amazing how many people have lived in Seattle for many years and have never been to Freeway Park. It’s rather large for a downtown/First Hill park, yet it’s also hidden. This project would make visibility and other improvements at a number of park entrances. 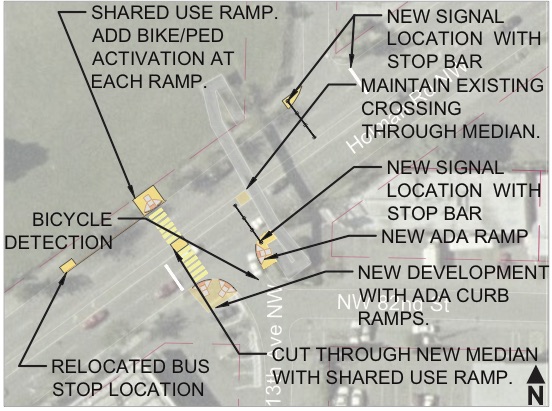 This project will do a lot of the heavy lifting for busy street crossings on the planned 6th Ave NW neighborhood greenway from the Burke-Gilman Trail to NW 85th St. But it also includes an accessible crossing of Holman at 13th Ave NW. There is an existing pedestrian walkway here, but it requires lots of stair climbing (so unusable for people biking or people with mobility challenges). This walkway was never intended to help people walk, it was installed so traffic engineers had a BS excuse not to make safe crossings on Holman itself. We’ve since learned that this doesn’t work for many reasons. Streets in neighborhoods need to be safe for everyone. This is another project where the applicant noted many needed fixes, but the approved work is dramatically scaled back. There are many problems with the Bailey-Gatzert Elementary School walk zone (and, of course, problems with bike/streetcar conflicts), yet this project will only add a concrete island on 14th Ave S where a paint/post island already exists and add a new sign at Yesler/Boren. The document notes that many of the problems can fixed through “ongoing improvement to the First Hill Streetcar.” 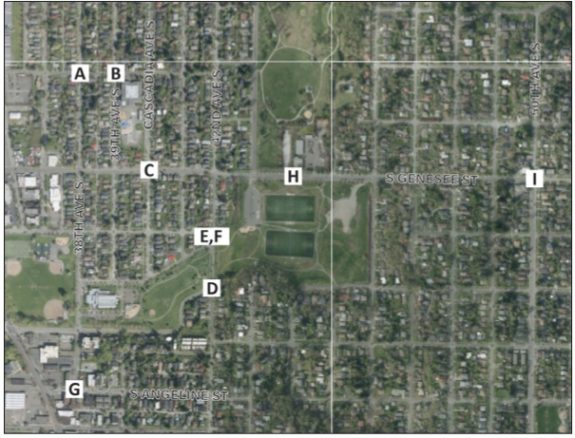 This project includes improved crosswalks and accessibility at a number of intersections near Hawthorne Elementary and the Genessee Park and Playfields. Much-needed work.

That’s it! Notice any highlights or problems with any of the projects that I missed? Let us know in the comments below.

This entry was posted in news and tagged neighborhood street fund, sdot. Bookmark the permalink.