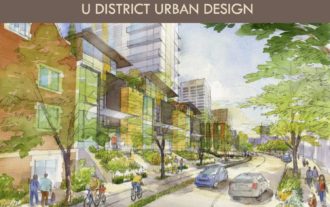 Image from May open house presentation. Their watercolor concept art game is strong.

More people want to live in Seattle than there are homes. The number of people moving to our magnificent city is growing faster than all those cranes you see in the skyline can build.

When homes are put out to bid at market values, people who have more money get them. Those who don’t have as much money get priced out. Communities are broken up. Many families that can least afford the many costs of driving end up living in car-dependent suburbs. And since affordable rent is one of society’s most important safety nets, a growing number of people end up homeless when rents rise.

The cold reality of Seattle’s market-rate housing is shameful, and there is nowhere close to enough subsidized housing to meet the need. Our city is doing so many other things right, but it’s so far failed to respond to people’s most basic need: A home.

The good news is that there are also a lot of engaged people who want to respond to this affordability emergency with bold action. And the Seattle economy has plenty of cash flow to solve this problem, but only if we work as a city to prioritize affordability.

The city’s desire to take bold action will be tested this autumn as the City Council votes on a revamped U District urban design plan. You can weigh in on the plans starting at 5:30 p.m. tonight (Wednesday) at Hotel Deca (45th and Brooklyn). Presentation starts at 6, public hearing starts at 6:15. 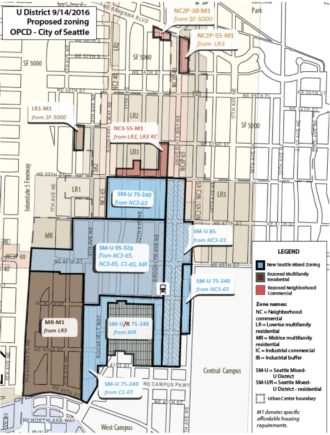 Map of the zoning changes, from a September briefing to Council.

Right now, most residential development cash in Seattle goes into luxury condos and apartments or new giant single-family homes. And this is due primarily to Seattle’s development rules, which essentially require new development to be unaffordable.

Severe limits on the areas of the city that can build denser styles of housing put a premium on that land. Requirements for building car parking dramatically increase the cost of building a new unit, decrease the number of units that can fit in a building and decrease the amount of retail space available.

After years of planning work, the City Council is set this autumn to make a major decision about the the University District. Already one of the bikiest areas in the city, the way people get around the U District will change much more when light rail arrives on Brooklyn Ave in four years. It’s about time the city put plans in place to take advantage of this major new transportation connection and build on existing walking and biking trips.

Remember, there are two ways to increase the number of homes with safe and convenient biking access: 1) Make more communities bikeable and 2) build more homes in our communities that are already bikeable. And while biking is not exactly the end goal of these changes, biking will help make it work by giving people an affordable, easy and healthy way to get around a busier neighborhood. 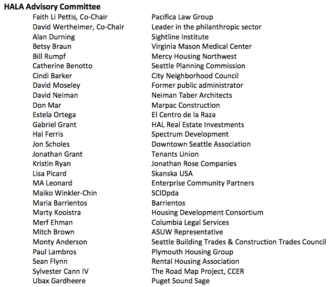 The plan includes many elements from Mayor Ed Murray’s 2015 Housing Affordability and Livability Agenda (“HALA”), a set of affordability ideas created through hard work and compromise by a variety of stakeholders including everyone from developers, major downtown institutions and hospitals, community organizations and urban planners. You can see this list to the right.

And though the U District urban design upgrades have been reduced through community process and compromise, they would be an early test of some of the promising ideas to emerge from HALA. Developers could build taller buildings, for example, but only if a certain percentage of units and commercial spaces are rented below market rate (referred to as “mandatory housing affordability”).

Of course, the U District plan is not nearly enough to address the city’s housing problems, but it’s a start. HALA is also just a start, and it may not be bold enough to fully get a handle on the problem.

I understand that people do not like change. And not all changes will be sunshine and rainbows like the watercolor image at the top of this post suggests. It’s hard to see beloved spaces get redeveloped. But as we have seen, that is going to happen whether the city changes the rules or not. The city has the power to set the development rules in a way that encourages our goals.

We need more homes, more unique small businesses and lower cost barriers for both. More than ever, we need to be a city that welcomes everyone, regardless of who they are, how they worship, how much money they make or what their immigration status is. We need to dramatically reduce our greenhouse gas emissions, most of which come from driving and energy-inefficient homes. And we need healthier communities where people can access healthy food and complete most or all of their daily errands by walking, biking and transit.

Below is a video about all the work that went into this new U District vision. Let’s pass it, then keep moving forward full steam with bold action for the rest of the city, too.

This entry was posted in news and tagged hala, u district, u district station. Bookmark the permalink.