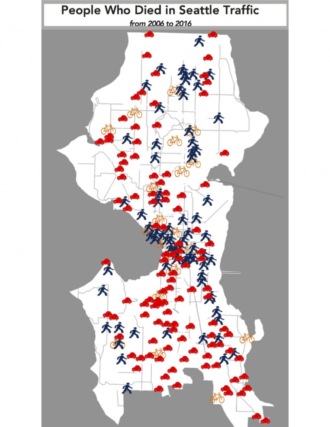 Two hundred forty people have been killed in Seattle traffic in the past decade. Ten times that many have been seriously injured.

Thursday, in solidarity with similar events across the world, neighbors from all over Seattle will converge on City Hall to remember those who have been killed or injured and call for transportation leaders to prioritize on our streets.

“We have the means and the technology and the ability to design streets that don’t kill people,” said Seattle Neighborhood Greenways (“SNG”) Executive Director Cathy Tuttle. “We shouldn’t wait any longer.”

At the City Hall rally Thursday at noon, representatives from neighborhood groups across the city will pick up their neighborhood’s set of silhouettes, one for each person killed in the past ten years. Those groups will then meet up locally Sunday to put up the silhouettes as a reminder of the loss traffic violence levies on communities (see below for those details).

“Looking at the totality of these 240 representative figures … is overwhelming,” said Tuttle. She hopes the action will be “healing and respectful,” but “also a way for communities to organize.”

SNG has been a central organizer of the event in partnership with neighborhood groups, Cascade Bicycle Club, the City of Seattle and Washington Bike Law (a Seattle Bike Blog sponsor).

We have the right to walk, bike and drive on streets that keep people safe. World Day of Remembrance is a UN affiliated world-wide event to commemorate victims of traffic violence and stand together to create a safer city for all.

On Sunday, November 20, families and groups around Seattle will install all of the silhouettes at local events.

This a difficult time for many of us right now. World Day of Remembrance, while not a joyous event, is something we can come together on, as well as to help raise awareness among our friends and neighbors.

World Day of Remembrance is not a political event, but it is the kind of community building and coming together process that will help us keep America great. Thank you for joining us.

The City Hall event is open to the public and will recognize attendees from Seattle Fire, Seattle King County Public Health Department, Washington Traffic Safety Commission, National Highway Traffic Safety Administration as well as families of the victims who have died in traffic in Seattle.

This entry was posted in news and tagged cathy tuttle, seattle neighborhood greenways, world day of remembrance. Bookmark the permalink.