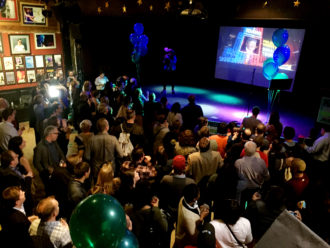 We passed the largest transit expansion measure in our region’s history by far. But it was hard to get too excited last night.

It seems like just yesterday we were arguing about whether Sound Transit 3 was too big of an investment. Yet by the time the big King, Pierce and Snohomish county vote totals hit the Crocodile stage during the ST3 victory party, it was hard for the crowd to muster much of a cheer.

Sure, people made sounds that were a lot like cheers. But it could also have been the release of nervous, distraught energy as it became more and more clear that the Midwestern votes Hillary Clinton needed weren’t going to come in.

When someone who has made such horribly racist, sexist and Islamophobic promises is given this level of power, it’s time to question everything we are doing are transportation activists. ST3 is great — yay! — but holy shit, the terrain of our nation just shifted. What are we going to do to fight for justice, equality and a sustainable future? We got good at passing big transportation funding measures, but the challenges ahead will be very different.

Founder and Editor of Seattle Bike Blog.
View all posts by Tom Fucoloro →
This entry was posted in news and tagged st3. Bookmark the permalink.

9 Responses to Region passes gigantic transit investment, but it feels so feeble today