What I did on my summer vacation

I specifically tried not to work for the three weeks I was traveling for my honeymoon. But of course being a bike blogger has poisoned my brain, and I couldn’t help noting city-making lessons for Seattle. So here’s a brief rundown of where I went and what I saw. 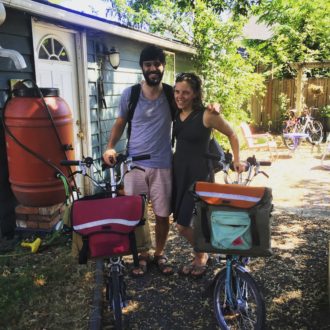 Ready to bike to light rail to start our trip.

First step in our trip was to pack up our Gilman Bags by (SBB advertiser) Swift Industries and load them onto our Brompton folding bikes we bought from (SBB advertiser) G&O Family Cyclery. These proved to be dependable and versatile multimodal travel machines.

Bringing the bikes through Seatac Airport was a breeze. We checked the saddles in our bags and carried the bikes through security (they fit though the scanners if the saddles are removed). Iceland Air checked them at the gate like a stroller, saving them the tumbling trip through the guts of the baggage system and, importantly, saving us the need to buy and lug along big bike cases. However, the Iceland (Keflavík), Amsterdam and Paris (Orly) airports were less friendly to the bikes than Seatac (we escaped with only one mangled fender, so it could have been worse). We’ll probably explore a box solution of some kind next time.

Kelli and I first flew to Iceland, which is a tremendously beautiful place. Reykjavik is a very cool city, and we had a great time soaking in the Blue Lagoon and hiking through the lava flats. A summer bike tour there seems like an amazing adventure. Added that to the to-do list. 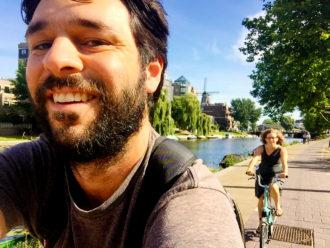 We then headed to Amsterdam, which is just an incredible city. A dense, major city with essentially no subway, the whole city shares the same surface streets. It’s a kind of chaos with people walking, biking, motorbiking, driving and riding the frequent trams all at the same time. And it works because everyone (well, except people driving, who are often stuck waiting) are moving at a consistent, safe speed.

Ten miles per hour is actually very fast if you don’t need to stop all the time. And if people are driving and biking slowly enough, traffic signals often just aren’t needed. This really helped support my concerns that Seattle’s use of traffic signals to help road safety is looking at the problem all wrong. If a person can’t cross a street without a signal, the street itself is the problem.

Amsterdam is bike-friendly almost despite the bike lanes, which are packed to the brim with people on bicycles and motos (it took a little adjusting to get used to motorbikes in the bike lanes). We quickly learned that the best streets for biking comfortably are the ones without bike lanes, since those streets are lower traffic and typically more scenic. Many of the canal-adjacent streets switch their one-way directions often to prevent cut-through traffic, but people can bike in both directions. This is a very easy and cheap way to create people-focused streets while still allowing car access.

There are so many streets in Seattle that could use this strategy. Most neighborhood greenways need some kind of traffic diversion, for example, and this could be a very cheap way to do it. This could also be a great way to lower the cut-through traffic on key scenic streets like Lake Washington Boulevard or select streets in the dense neighborhoods like Bell Street.

We then took a train to Groningen, a wonderful, compact city filled with art (the Groninger Museum is one of the best museums I’ve ever been to). The city was also a great launching pad for a bike adventure. We headed first to the North Sea and stayed a night in little Vierhuizen before biking across Friesland to Leeuwarden, where we caught a train to Brussels.

Biking across the Netherlands is no sweat, and most of the other people biking outside the cities were of retirement age. We biked halfway across the country either on separate bike paths or low-traffic streets. Every bridge was bike-friendly. It was almost too easy.

For an idea of what bike travel is like in the Netherlands, consider that this is what bicycle wayfinding signage is like even in the middle of vast farmland with no other human beings in sight: 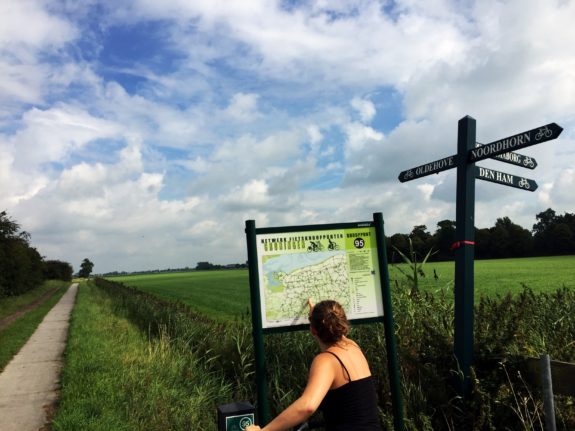 Brussels was really just a quick stopover to break up a long train day, but we were surprised to find that the city closes many central streets to cars nightly. Busy streets were often marked with feeble sharrows and, for the first time on our trip, some people were wearing helmets. In other words, it felt like home.

But the city also had some great small streets that were either car-free or too skinny and winding to attract lots of car traffic. This was especially true in our next stop: Lyon, France. 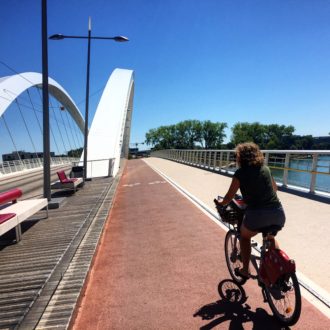 We stumbled on this awesome car-free (bike/walk/tram) bridge across the Rhône near the confluence in Lyon.

I fell in love with Lyon, where the long-established bike share system Vélo’v is a regular part of daily life. And a great many of those trips are up and down the city’s packed car-free or car-light streets right in the heart of the city center. As Seattle considers the role of car-free streets in our city — especially on Capitol Hill — efforts by cities like Brussels and Lyon could be a good guiding light.

Car-free streets are great for nightlife, sure, but they are also great during the daytime (deliveries are still allowed, or at least tolerated). And when they are long and continuous, they make great bike routes, too. Imagine a car-free Pike or Pine Street from downtown to Madison…

Our trip then took us to Paris, which is of course an amazing city. But wow, that city has a serious car problem. 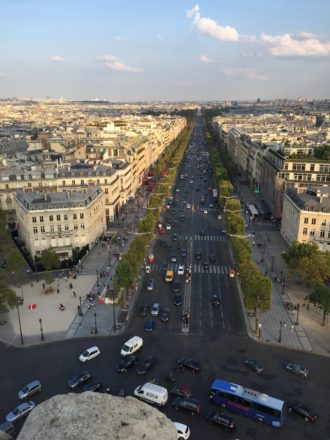 Triomphe of Car Culture (as Kelli titled this photo)

It’s Paris. It’s beautiful and packed with history and art and culture and everything that comes with being a global center. But it is also packed with cars and streets so wide it takes slower-moving people two signal cycles to cross (if you zoom you can see the skinny median in the photo is packed with about 30 people).

Don’t get me wrong, I loved Paris for all kinds of other reasons. But for the issues we talk about on this blog, I was surprised the city is not more of a leader in European safe streets efforts. We biked a little bit using the ever-present Velib bike share system, but it was pretty stressful vehicular cycling each time we did it (except for some of the lovely riverside bike routes and the rare protected bike lane). So we mostly stuck to walking and the Metro. We were on vacation, after all.

Thanks for reading, everyone! This trip was a great reset for me. I feel reinvigorated and ready to continue pushing our city to experiment with our public spaces, with our land use choices (that was a huge lesson from every city on this trip: Seattle needs way more small business spaces!) and to take bold action of safe streets and connected bike routes.

Seattle is a stunning and special city, and we have the opportunity to be a true global leader in making the city of the future. Some of that means taking lessons from old cities in Europe, but some of the means forging a genuinely new path (like being a fully accessible city for people with various mobility challenges, something most places we went in Europe failed spectacularly to achieve).

We have a lot of work to do, but so long as we can push past people’s predictable resistance to change (a problem in Europe, too) Seattle can become one of the great cities of the world. It can happen fairly quickly if we let it.

30 Responses to What I did on my summer vacation