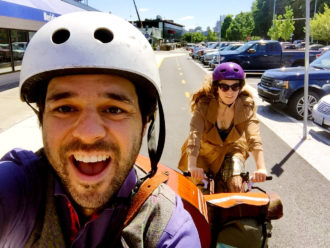 After years (decades?) of debate, public meetings and legal action, the Westlake Bikeway is finally ready to open.

The city and Cascade Bicycle Club are hosting an opening celebration Thursday at the south end of the bikeway in Lake Union Park. The party goes from 4:30 to 6:30 p.m. with speakers and a ride at 5:15.

Once open, the bikeway will immediately become one of the most popular bike routes in the city. It will be the first flat and separated bike route connecting the Burke-Gilman Trail to the center city. 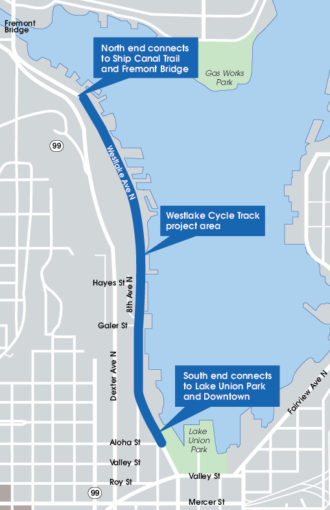 The project was delayed after legal action in late 2013 threatened passage of the city’s Bicycle Master Plan. An extremely extensive public outreach process was developed to go inch by inch along the route, essentially finding ways to squeeze as many parking spaces into the area as possible. In the end, 90 percent of the parking spaces were preserved, and new parking rules were implemented to make sure those spaces are optimized for Westlake business access rather than free all-day parking for center city employees.

Many compromises were made over a period of months, then that plan was sued, as well (by the Nautical Landing “superyacht” marina). But after even more compromises, the project finally moved forward and started construction earlier this year.

It’s been a long, messy road for the $3.6 million project (half of which came from grant funding). But as soon as it opens, that will all be history.

Next step: Connecting it seamlessly to and through downtown.

This entry was posted in news and tagged westlake cycle track. Bookmark the permalink.

43 Responses to Westlake bikeway one week from opening, celebration Thurs