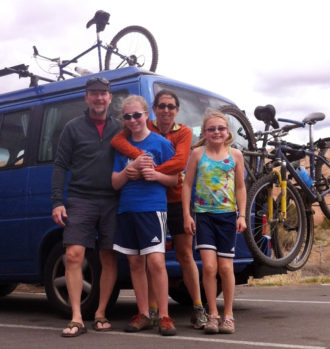 The Loper family. Photo from a 2012 Cascade Bicycle Club profile.

The day I first met Clint Loper, he was surrounded by an endless sea of kids biking off a Top Pot doughnut on their way to class at Bryant Elementary. Nearly a quarter of the school’s students biked to class on Bike to School Day 2013, an astounding and jaw-dropping increase from the dozen or so who biked just a few years earlier.

Clint passed away Wednesday after a two-month battle with acute lymphocytic leukemia. He leaves behind his wife Leslie and children Berkeley and Emmie.

Clint was a kind, open-hearted force for change in his community, inspiring school communities across Seattle and helping them through Walk.Bike.Schools, an organization he helped start. I know he and his family also have other strong communities, but I mostly knew the Loper family through their bike to school work.

Longtime readers of this blog may know Clint best as Seattle Bike Blog’s Bike to School Expert. Since hearing that he passed, I’ve spent much of the day re-reading his posts and crying. Like this heartfelt post he wrote in April 2013 in the wake of a tragic collision on NE 75th Street outside Eckstein Middle School where he was so active in safe streets work. Clint was still processing such a big loss in his community, so it’s oddly comforting and inspiring to read it as we deal with losing him.

I’ve also been searching for photos of him, but instead keep finding pictures packed with kids all biking to school together. Clint isn’t usually pictured because he’s behind the camera, helping to create the space for those kids and encouraging their parents to join the bike to school revolution.

Though I’ve sat with Clint through many meetings (in addition to co-founding Walk.Bike.Schools and NE Seattle Greenways he also served on Seattle’s Bicycle Advisory Board), it’s those mornings with neighborhood kids biking together, smiling and happy on their way to school, that will be my lasting image of him.

Thank you for being so open, sharing and encouraging, Clint. You helped incite the cutest, most heart-melting transportation revolution Seattle has ever seen.

I am holding his family and close friends in my thoughts.

Here’s an excerpt from his very first post, describing how much he loved those simple bike rides to school with his kids: 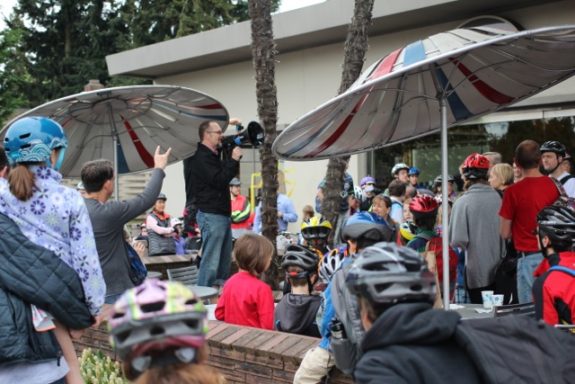 Clint on the bullhorn during Bike to School Day 2013. Photo by Rebecca Nelson at Ravenna Blog, used with permission.