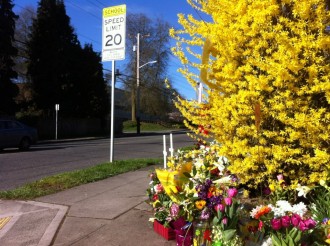 A memorial continues to grow at the collision site, across the street from Eckstein Middle School

By now, most readers will know the basic facts: A fatal collision at 4:10 pm on Monday, March 25 on NE 75th St. took the lives of two grandparents and left a woman and her newborn baby in critical condition. The circumstances were horrific and egregious, as a driver with multiple DUIs collided with a family just beginning their new life with their 10-day old baby. The toll the collision took on the Schulte family was beyond measure.

A Mix of Grief and Outrage

The tragedy deeply affected the NE Seattle neighborhood near Eckstein Middle School. It also shook many of those working to make Seattle a more pedestrian and bicycle friendly city. The community around Eckstein — like many in Seattle — is embracing walking and biking more and more. Increasing numbers of neighbors are hopping on their bikes to commute to work at the UW or downtown each day.

Programs supporting school kids and families in choosing active and sustainable transportation are growing from year to year. And NE Seattle Greenways, the local community councils, and many neighbors are working for safer and more people friendly streets. The local community has begun to quietly take back its streets for people-powered transportation.

And then came March 25. The initial reaction was sorrow. That deep sorrow continues to this day, and will for a long time to come. But the sorrow quickly became mixed with anger and outrage.

Yes, outrage at a system that allows a man with multiple DUIs to get behind the wheel again and use his vehicle as a deadly weapon.

But also anger and disappointment that collectively, as a community and a city, we have not prioritized redesigning our streets to make them safer for all users. The reactions from neighbors included countless mentions of close calls and near misses on NE 75th St. It turns out this street has been a problem for a long time. And as bad as the collision was, imagine if it had occurred earlier that afternoon as Eckstein was dismissing students for the day and dozens of kids were streaming down NE 75th St.

There were no bicycles involved in this tragedy. But the needs of pedestrians and bicycle riders are often interlinked, as are at least some of the solutions in terms of road improvements. Intersections are one of the prime examples of problem spots that affect both walkers and bikers. And how many times in the last few years has it been a cyclist who became the victim of a similar tragedy?

The tragedy on NE 75th St. could have been prevented, or at least could have had much less disastrous consequences. Even a drunk driver — if he was traveling on a road engineered for a much lower speed — likely would have caused less harm. There are many tools for redesigning this street to reduce vehicle speeds and shorten pedestrian and bicycle crossing distances.

If you designed our city, would you put a street like NE 75th in front of a school with an enrollment of 1300 students? An arterial that is overly wide, with undefined lanes, too high of a speed limit, and too many drivers who don’t obey the rules? Of course you wouldn’t.

One potentially positive outcome that has emerged from the tragedy has been neighbors and community groups working even more closely together than before to demand improvements. And NE 75th St. clearly does need improvements. The resulting community meetings and the early commitments from the city seem hopeful.

The tragedy also led to the type of direct action that can be so important and meaningful in moving forward. A memorial emerged almost instantly at the collision site, and grows to this day. Large DIY traffic signs were placed on the street to encourage cars to slow down and watch for pedestrians. When Bryant Elementary held their springtime bike ride, it included a moment of silence and donations for the Schultes. It was an affirmation of the community’s commitment to continue biking and walking, even in the wake of the tragic collision. 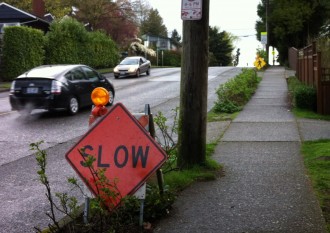 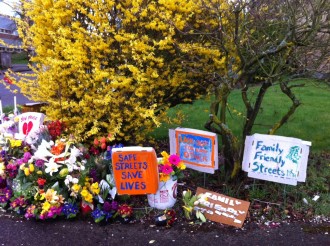 After the memorial walk, demands for safer streets became clear.

And on April 1, a week after the tragedy, the community came together for a memorial walk. It was an opportunity for everyone to pay their respects to those that were lost, and to offer support for those who will struggle as they regain their lives. It was also a clear and unequivocal call for safer streets.

Since the tragedy there also have been multiple meetings, including a well-attended community meeting the day after the memorial walk. And tonight there is an Eckstein PTSA meeting that SDOT officials plan to attend.

There have been some good ideas put forward by both the community and the city, and there is some hope that the time has finally come for a redesign of this hazardous street. Seattle has now announced a suite of improvements for NE 75th — both short-term elements such as improved crosswalk signals and signage and longer-term planning that may lead to a redesigned street. At the community meeting, one city councilmember even mentioned the possibility of a “road diet” to reduce the width of the road and calm speeds.

The short-term improvements will be helpful, but are far too limited. Let’s hope that the planning can occur quickly and lead to a comprehensive longer term solution.

One of the street’s problems is high vehicle speeds. The Seattle Department of Transportation conducted speed studies in September 2012 and determined the 85th percentile speed was 37 mph westbound and 34 mph eastbound. This means that of the nearly 17,000 vehicles per day using this 30 mph road, about 2,500 of them are speeding 35 mph or greater. Studies have shown that lower vehicle speeds greatly change the outcome in collisions with pedestrians. The need to reduce these speeds is huge. 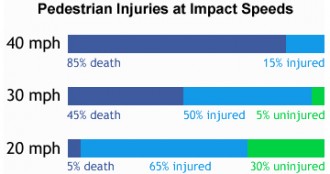 Research from the UK; graphic from thegreatermarin.wordpress.com

While the physics involved when a person is riding a bike instead of walking are somewhat different,  the general finding is the same: speed kills. A mostly unprotected human — even wearing a helmet — doesn’t stand much of a chance against a car or truck traveling 30 mph or greater.

The issues at the local street scale seem pretty clear, and hopefully NE 75th St. will get its long-overdue redesign. But a focus on NE 75th in the wake of this tragedy seems far too limited in scope.

Wherever you live in Seattle, think of your own neighborhood. Chances are there is a street like NE 75th St. there. A street where the speeds are too high, the reasonably safe crossing locations too few. Chances are it separates you or or your friends and neighbors from their park or school. Or maybe the nearby business district or community center.

Maybe that street is Rainier Ave. Or Admiral Way. Perhaps that highway-like street is the reason your kids don’t walk or ride their bikes to school.

Seattle has done a good job of publishing it’s data on vehicle speeds and on collision characteristics. In addition to identifying many arterials where speeds are too high, Seattle’s 2011 Traffic Report (the most recent available) concluded that the most common cause of injury in a pedestrian or bicycle collision with a motor vehicle is the car or truck failing to yield the right of way. The report also found that the majority of collisions involving both bikers and walkers occur at intersections. Sound familiar? Sounds a lot like NE 75th St. These 2011 findings are consistent with previous years as well.

So how do we get our city to truly prioritize addressing these problems? To embrace a model like Vancouver’s where pedestrian and cycling needs are considered higher priorities than any other mode of transportation? The Bicycle Master Plan will no doubt recommend some innovative new infrastructure approaches, but will Seattle commit serious funds in the next few years to retool our streets to work better for people biking and walking?

NE 75th St. has expanded a citywide conversation about the need for safety improvements for people using our streets. Can this horrible tragedy at least create a legacy of change so that this never happens again? That remains to be seen. But at minimum, it is a clear reminder of the need for all of us who care about these issues to rededicate ourselves to rebuilding this city into one with safer streets that work for all of us. It’s time to demand that Seattle prioritize biking and walking needs in both its policy and budget decisions.