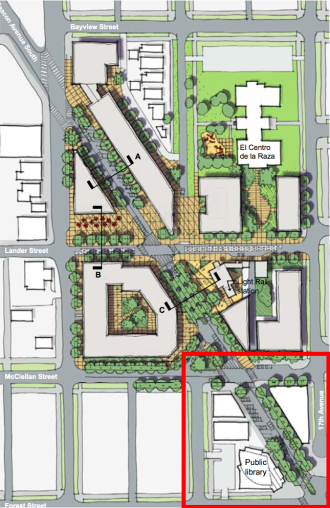 Beacon Hill is a growing walkable and bikeable community, but there’s one big safe streets challenge: Beacon Ave. (OK, fine, there are a couple more, too.)

Beacon Ave cuts a diagonal across the neighborhood grid, creating many awkward or extra-long crossings.

And unfortunately, people keep getting seriously injured or killed. Most recently, a 58-year-old woman was killed crossing Beacon Ave at S McClellan Street in January.

But it doesn’t need to be this way, and neighbors are organizing to prevent it from happening again.

Beacon Hill Safe Streets was formerly known a Beacon B.I.K.E.S. (“Better Infrastructure Keeping Everyone Safe”) but recently changed names to emphasize that they work to “make clear that our focus is on making streets safe for people of all ages and abilities, whether they walk, bike, or drive.” They are meeting 6 p.m. tonight (Thursday) at Beacon Hill Library.

Now the group has focused its attention on the area around the light rail station, library and new housing development where the fatal January collision occurred. They are working on a Neighborhood Street Fund application that will help the area grow safely and improve safe access to these major destinations for all road users, but especially people walking and biking.

So if you live in the area and haven’t yet gotten involved, this is a great opportunity to get plugged in and help out.

This is a reminder that Beacon Hill Safe Streets (formerly Beacon B.I.K.E.S.) will hold its monthly meeting TONIGHT at the meeting room of the Beacon Hill Library from 6:00pm to 7:45pm.  The meeting is open to the public and all are welcome and encouraged to attend.

This month’s meeting should be particularly interesting and exciting as it will focus entirely on proposed safety improvements on Beacon Avenue.  The City is asking for proposed projects for the Neighborhood Street Fund, which can fund large street projects of up to approximately $1,000,000.  Beacon Hill Safe Streets plans to submit a proposal for major safety improvements to Beacon Avenue at the intersections of McClellan, 17th, and Forest.  As most of you know, a pedestrian was killed in January crossing the street at Beacon and McClellan, and the unsignaled six-way intersection at Beacon / 17th Ave / Forest has long been a complete mess (and will only see increased traffic with two new large construction projects on the horizon).  Applications for the Neighborhood Street Fund are due April 17, and the next round of projects will not be for another 3 YEARS, so now is our chance.

These intersections have been repeatedly studied over the years, culminating in a full concept plan for the Beacon Hill Town Center proposed in DPD’s 2011 Urban Design Framework (see below, with the proposed project area highlighted).  We see this Neighborhood Street Fund proposal as an important next step to building out the full vision of these community-developed neighborhood plans.

Please join us tonight to discuss the future of the Beacon Hill town center and to help craft our proposal for the Neighborhood Street Fund.