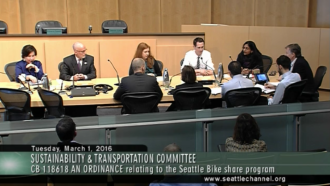 At the end of the City Council Sustainability & Transportation Committee meeting Tuesday, the Pronto ordinance appeared to end in a 3-3 tie with Councilmembers Tim Burgess, Lisa Herbold and Debora Juarez voting NO and Rob Johnson, Kshama Sawant and Mike O’Brien voting YES. Even Committee Chair O’Brien thought it was a 3-3 vote, saying the ordinance would head to a vote of the full City Council with no recommendation.

But as we reported on Twitter last night, a review of the video shows that Juarez actually voted YES. But when O’Brien describes the vote as 3-3, nobody corrects him.

Johnson confirmed late Wednesday via Twitter than the vote will go to the Council as recommended to pass on a 4-2 vote. I have a question to Juarez’s staff to clear up her intended vote. Below is the video of the confusion (you can watch the whole meeting here):

The meeting became tense due to a surprise challenge to the city’s buyout plans Burgess announced just hours before the vote. Juarez arrived late in the meeting essentially to support Burgess’s amendment. A different, though similar, amendment by Herbold failed with only her own vote in favor. Burgess’s vote also failed 2-3 with Herbold abstaining.

Though O’Brien was clearly in favor of public ownership of Pronto with some Council oversight amendments (which passed unanimously), the strongest support came from Johnson and Sawant.

“This program needs to operate at a scale that provides utility,” said Sawant, who strongly supported an expansion focused on equitable access to help people access transit.

“Bike-share and associated infrastructure should not be relegated to an attraction for cycle-inclined tourists,” Johnson wrote in a blog post and email to constituents. “This is an investment to increase the transportation choices this city offers to residents.”

Herbold’s amendment to prevent a city buyout and let the system go bankrupt did not get any other votes. But her support for a private bike share system (like Car2Go) kicked off a great conversation about the value of public ownership (well, great except for an odd SDOT comment about a Playboy Playmate that several other outlets picked up on immediately).

New York’s Citi Bike was perhaps the best example of why public ownership is important.

“New York has faced, perhaps more than any other system, critiques over equitable distribution of the bike share stations,” said SDOT Director Scott Kubly. It’s also important to remember that New York is so often the exception to the rule in U.S. cities because of how dense and big it is. Citi Bike launched with huge sponsorship investments that most cities can only dream of. Citibank paid $41 million for five years to brand that system, compared to Alaska Airline’s $2.5 million for five years to sponsor Pronto.

Make no mistake, relying on a private company to build from scratch and operate a successful bike share system in Seattle is a long shot, especially if we allow the current functioning system to go bankrupt and close along with its paid membership and sponsorship deals.

But even if a private system were to start, odds are likely that it would focus on areas that would make money. Sometimes, this will pair well with our existing goals, like connecting dense neighborhoods to major transit hubs or connecting popular tourist destinations with major business districts. But our goals also include improving access for low-income residents.

One exciting idea SDOT’s Nicole Freedman mentioned in the meeting was offering $5 annual memberships for people making under 200 percent of poverty (the same level as ORCA Lift). Freedman, drawing on her experience leading Boston’s Hubway system, said $5 is just enough to get buy-in from the user, and has worked better than giving them away for free.

The $5 passes could also come with extended “free” ride times from 30 minutes to 60 minutes, learning from feedback from low-income users who have more “range anxiety.” The ticking clock before overage fees kick in is more ominous and stressful to people who can’t easily spare the extra $2.

Sawant also heavily pressed the desire to get the bikes included in the ORCA Card system, making it that much easier for transit combinations. Imagine if ORCA Lift holders were all offered the $5 Pronto pass add-on when they get or renew their cards.

This line of innovative and equitable transportation improvements for the city carried the day. It may have been helpful to SDOT and the Council to consider Herbold’s amendment, since it forced them to clearly articulate all the reasons why bike share should be seen and treated as public transit.

Burgess also pressed SDOT Director Kubly on the timing of the buyout process, asking him about a revelation first reported here that SDOT had been in talks about buying the system since May. Shouldn’t we have had this public conversation then?

“Given the benefit of hindsight and how this has evolved, yes,” said Kubly.

Even supporters of the system are clearly frustrated with how SDOT has handled the buyout, which is why O’Brien pushed for an amendment adding Council oversight of the expansion process and regular reports on the system’s financials. This amendment received unanimous support.

What was mostly left out of the discussion was that two light rail stations are set to open within the existing bike share service area just five days after the full Council vote. Making transit connections like this is where bike share thrives most. It would be irresponsible to start dismantling our bike share stations at the same time we are celebrating the opening of these two stations constructed at a regional cost of $2 billion.

Pronto is not a failure. A balanced budget is within reach. It is rare for any business to make a profit on its first year in operation, and bike share is no different. SDOT and Council analysis found that if the city buys it out and there is no increase in revenue, the system would run about $115,000 over budget. This is absolutely within reach of balancing, and projections for the success of an expanded system are even rosier.

“A lot of other small businesses…need to go to the bank to get capital,” said Johnson. “We’re pretty close to breaking even in the first year of operations, which for most businesses take three of five years in order for them to be able to turn a profit off that first bank loan.”

The city’s deal brings in $2.1 million in assets for $1.4 million, which he said is “a pretty good deal.” And since the system is already “pretty close to breaking even,” it seems like an even better deal.