Saturday: Join us for a screening of Bike vs Cars and an after-show chat 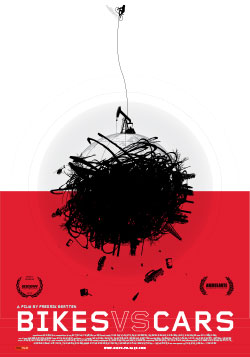 Bikes vs Cars is a new documentary that attempts to lay out the global and local problems caused by car culture and car infrastructure in our cities and how people in cities across the world are pushing back, often while pedaling around their cities on two wheels.

The film is screening at the Grand Illusion in the U District December 4 – 10, and the 7 p.m. Saturday show will include an after-film chat with yours truly and some other bike advocates, including Kelli from Cascade.

The name of the film is a pretty big turnoff, for sure. It’s a faulty framing for having a complete and productive transportation conversation. What about walking? Transit? And I suspect that will be at least part of what we talk about Saturday. I was able to see an advance screening, but I won’t give away too many of my thoughts ahead of Saturday’s chat. You just have to join.

If you really want to read a review, Seattle’s own Josh Cohen wrote a review recently for Next City.

More details from the Grand Illusion:

Bikes vs Cars depicts a global crisis that we need to talk about: climate change, earth’s dwindling resources, cities where the entire surface is consumed by the car. An ever-growing, dirty, noisy traffic chaos. The bike is a great tool for change, but the powerful interests who gain from the private car invest billions each year on lobbying and advertising to protect their business. In the film we meet activists and thinkers who are fighting for better cities, who refuse to stop riding despite the increasing number killed in traffic.

BIKES vs CARS – OFFICIAL TRAILER from WG Film on Vimeo.

This entry was posted in news and tagged bikes vs cars, grand illusion cinema, josh cohen. Bookmark the permalink.