With the problem on the rise, UW Police host a Bike Theft Symposium 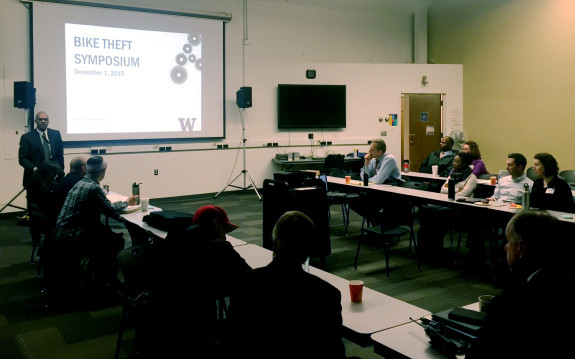 Bike theft is up, at least on UW campus.

“It’s our number one property crime on campus,” said UW Police Deputy Chief Csaba Maczala. “That’s a good thing, since violent crime is down. So I’m glad we most have to deal with property crime.”

So the UW Police reached out to community partners and hosted a Bike Theft Symposium Tuesday to come up with some ideas for how to decrease thefts and increase the chances victims will get their bikes back.

The annual cost of bike theft on campus? $118,354, and that’s not even counting parts stolen off bikes or bikes that are stolen but not reported to police. We know this because part of their effort to focus on battling bike theft so far has been to gather and analyze data to see if they can find patterns to target. 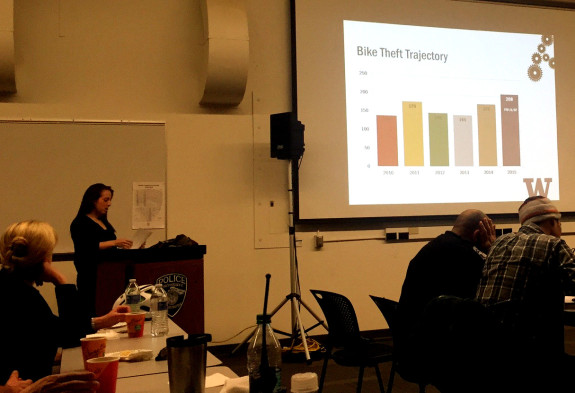 UWPD Analyst Kendra Borzio found that year-over-year, the hottest days for bike theft are Tuesday, Thursday and Friday. Most thefts occur during the day.

56 percent of stolen bikes were secured only with cable locks, which are easily cut with common bolt cutters. This includes desirable higher-end bikes. So if you think you’re cutting costs or dropping weight from your bike by using a cable lock, it’s really a big gamble.

In fact, whenever UWPD successfully reunites someone with their stolen bike, they include a free u-lock when they return the bike.

So using a quality lock (and locking up securely) is obviously one way big way to protect people from bike theft, and much of the conversation during the symposium revolved around how to better teach people how to keep their bike secure. Better signage near bike racks? Lessons during orientation? Deals with local bike shops to help encourage buying a u-lock over a cable lock?

Conversation also focused on how to get more UW community members to register their bikes with free services like Project 529 and Bike Index (Seattle Bike Blog partners with Bike Index to power our Stolen Bike Listings, but the services share data). It’s a somewhat tricky problem since almost nobody knows their bike’s serial number, an important piece of information to include when registering. There seemed to be general agreement that engaging people and offering the free registration while they are with their bikes would probably be more effective than just sending out a mass email or including it in a welcome packet.

Commute challenges like Bike Month and Ride in the Rain could also be a good way to also get people to register their bikes.

There was also a lot of talk about how to improve the campus bike parking, including audits of which kinds of racks and rack placements draw the most theft and which work the best.

Ultimately, stealing bikes is an “old reliable scheme to get some quick cash,” as Officer Jackson put it. And there are a handful of people who commit a huge chunk of these crimes.

But as Deputy Chief Maczala said, “We can’t arrest our way out of this problem.”

And that’s where the conversation during the symposium fell short. There was a lot of good talk about how to better get bike owners to protect their bikes and a little talk about some facilities and policing work that can help. But the elephant in the room during nearly every bike theft conversation is addressing the root causes of property crime.

And it makes sense why people avoid them since the issues are just so big. Poverty, limited drug treatment opportunities and ineffective drug enforcement policies, access to a job, prisoner reentry challenges, affordable housing, and other causes that can lead to theft are huge social problems to solve. But until we do so, we need to understand that we’re really just mitigating damages.

“I’ve been a cop for 31 years, and it makes me feel better to get these bikes back to people and see their faces than it does taking someone to jail for many crimes,” she said in a conversation a couple months ago. For her, keeping an eye our for bikes she saw on Bike Index was a way to get a spark of positivity in her work instead of only dealing with the negatives. Police officers often only see people during their worst life moments, so I can see how returning a bike could be pretty rewarding. Maybe that means the thief just goes and steals a different bike. Who knows? But at least one person got their beloved means of transportation back.

UWPD does have GPS bait bike equipment. Perhaps tracking where bikes go can lead to bigger busts and make buying bikes less appealing to bigger fencing operations. After all, if you’re trafficking bigger products like drugs or guns, maybe it will no longer be worth the risk to also traffic bikes if one of them might lead cops to your front door. Or at the very least, we can learn some things about how stolen bikes move around our city.

One idea I’ve heard tossed around by many different people — but did not come up today — is to have a single SPD officer be the point person for bike thefts. Too often, bikes don’t get recovered because the system is too slow to respond to a police street stop or an online sale on Offerup or Craigslist. Better use of existing tools, like Bike Index and Project 529, and someone coordinating within SPD and between SPD and UWPD could get far more bikes back to their owners.

Meanwhile, Bike Index keeps assisting in getting bikes back. Here’s a roundup just of November recoveries. There were a ton. Q13 also profiled a few examples of how people are taking matters into their own hands to assist in bike recoveries:

26 Responses to With the problem on the rise, UW Police host a Bike Theft Symposium