Summer ain’t over yet, dammit.

This weekend is by far the biggest open streets weekend Seattle has ever seen.

We’ve already told you about today’s Park(ing) Day, the biggest in Seattle yet. More than 50 pop-up parks will appear in on-street parking spaces throughout the city, including some ambitious bike lane and safe streets demos. The parks will be open 10 a.m. to 7 p.m. Here’s the map.

We’ve also already told you about Ballard Summer Parkways. Tomorrow, seven miles of residential streets will become a giant linear park. There will be music, food, festivals and more along the route. It will be open from 11 a.m. to 3 p.m. 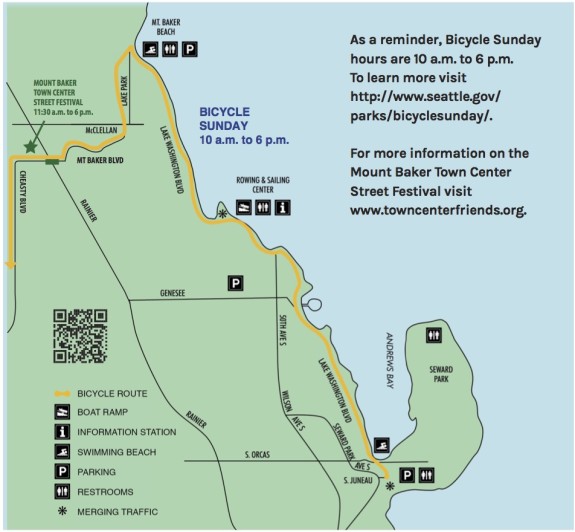 Sunday is the final Bicycle Sunday of the year, and for the first time in a long time, the route will be extended from Lake Washington Boulevard, continuing up Mount Baker Boulevard to the Mount Baker Town Center Street Festival near the light rail station. The route will then even connect across Rainier/MLK to Cheasty Boulevard leading up Beacon Hill.

It’s a car-free tour of historic Olmsted Boulevards long cut off by busy streets, so this is a rare treat. The route is open 10 a.m. to 6 p.m.

The final Bicycle Sunday of 2015 will be getting a special extension as a part of the Mount Baker Town Center Street Festival on Sunday, September 20th.

For one day only, the route will continue from Lake Washington at Mount Baker Beach through Mount Baker Park, up Mount Baker Boulevard, and all the way to Cheasty Boulevard! Follow the special signs and explore more of your neighborhood by bike. At Mount Baker Station, take a break to check out the Mount Baker Town Center Street Festival, a free family-friendly event that will include music, entertainment, food trucks, and art exhibits from 11:30 a.m. to 6 p.m. See the map below for the special extended route and join us!