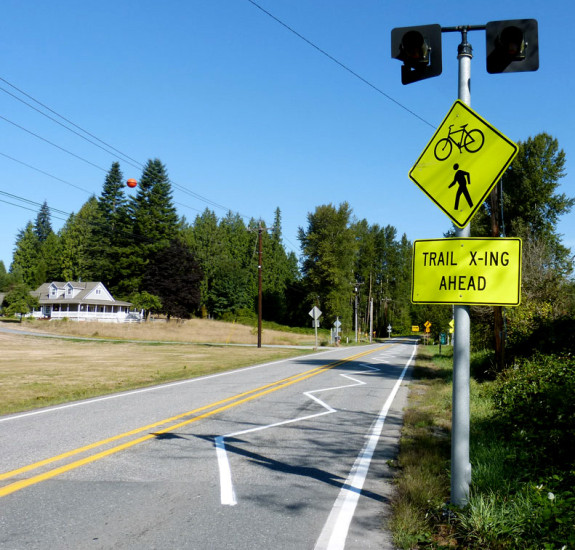 The faster someone is driving, the less likely they are to stop for someone entering a crosswalk. That’s just a street design fact.

So how can the state improve safety for trails that cross highways, especially in rural areas where traffic on both the trail and highway is relatively sparse?

Well, their newest experiment is in place now north of Arlington where the Centennial Trail crosses SR 9. The crossing already has a blinking light that trail users can activate by pushing a button. But a recent study found that 18 percent of people driving did not stop or even slow down for people trying to cross, according to WSDOT.

So WSDOT is testing the state’s first zigzag crosswalk warning. The zigs and zags get closer together as you approach the crosswalk, giving a very obvious warning that there is something coming up you need to pay attention to. Hopefully that plus the standard crosswalk markings plus the blinking lights will be enough to get people to stop.

They are also installing the zigzags on SR 20 in Concrete. If testing goes well, the state hopes to roll the cheap markings out at more locations.

The zigzag markings are a test – the first of their kind in Washington state – to see if they might help improve driver’s compliance with slowing down approaching a crosswalk. While we haven’t had any specific safety problems in these areas, this is a low-cost way for us to try something that we believe will increase the level of compliance at crosswalks.

A few states, including Virginia and Hawaii, have implemented similar pavement markings near crosswalks and have seen positive results. These markings are also used extensively in Europe – they are even at the iconic Abbey Road crossing in London.

When you get in some of these rural locations, drivers can start to tune out and all of a sudden you come upon these particular crossings. A recent study of the SR 9 crossing showed that 18 percent of vehicles did not slow down or stop for a pedestrian at the crosswalk, which currently also has a flashing beacon that can be activated by pedestrians and cyclists. The new zigzag crosswalks will help give a visual indication that you’re approaching a crosswalk and you should slow down and be aware.

The cost of installing the new pavement markings in the three locations is expected to be $5,000-$6,000. The paint is the same as is currently used in crosswalks and railroad crossings so vehicles – including motorcycles – should have no issues traveling over them. If the test program at these sites is successful, we may evaluate other areas that could benefit from the unique pavement markings as a low-cost alternative to electronic crosswalk indicators.

21 Responses to Could painting zigzag lines on the road make trail crossings safer?