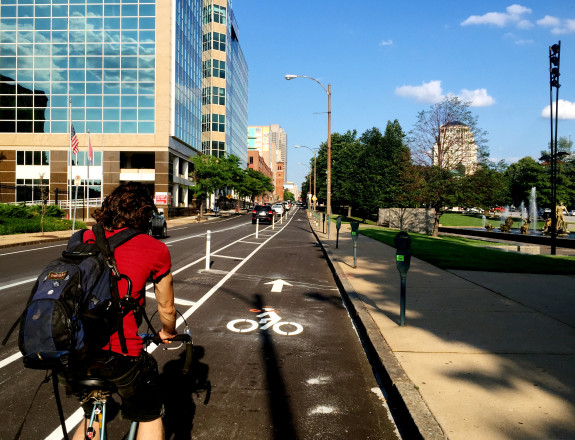 So, I’m my hometown of St. Louis, Missouri, about to become godfather to my nephew Luke (yes, I will be insufferable with Don Corleone quotes for the next couple days), and I heard that there was a brand new protected bike lane downtown. So of course I had to check it out.

The bike lane goes 1.2 miles from Union Station to the Old Courthouse along the park side of Chestnut Street right through the heart of downtown. As you bike, you are flanked by a wonderful blend of magnificent historic buildings and popular modern additions like the City Garden.

It wasn’t even totally finished yet (signage was largely still missing), yet there already children biking with their families. If you had said a few weeks ago that kids would be biking comfortably on a downtown St. Louis street, people would have thought you were crazy. That’s the power of protected bike lanes, and the change can happen overnight. 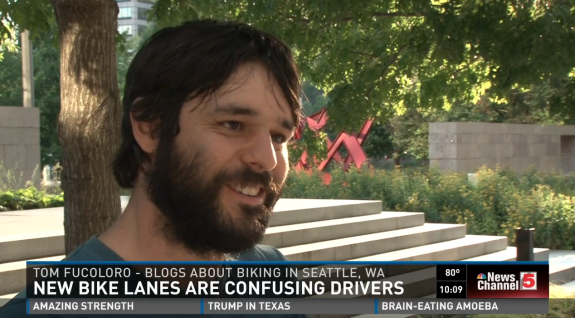 So anyway, here I am, halfway across the country vising family, and somehow I run into a reporter and end up on the evening news talking about protected bike lanes. Despite the flip-bait™ headline “NEW BIKE LANES ARE CONFUSING DRIVERS,” it’s actually a good report.

And I was able to squeeze in this surprising fact:

“Seattle is known as a bike friendly city, and as of today St. Louis has more miles of protected bike lanes downtown than Seattle does,” Fucoloro said.

It’s true! Granted they only have 1.2 miles, but that’s double Seattle’s 0.6 miles on 2nd Ave (though I guess we’re tied if you count each way on 2nd as its own lane).

The new lane is part of a recent rollout of bike improvements through a partnership between the city, some nearby cities and suburbs and the Great Rivers Greenway organization (see their joint press release). But the Chestnut bike lane is one bold move that comes after a series of terrible traffic deaths in and around downtown this year.

So way to go St. Louis. Let this be the start of a downtown safe streets revolution. Keep ’em coming.